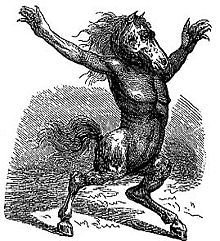 An early woodcut image of Orobas.

In demonology, Orobas is a powerful Great Prince of Hell, having twenty legions of demons under his control.

He supposedly gives true answers of things past, present and to come, divinity, and the creation of the world; he also confers dignities and prelacies, and the favour of friends and foes. Orobas is faithful to the conjurer, does not permit that any spirit tempts him, and never deceives anyone.

He is depicted as a horse that changes into a man under the conjurer's request.

The name could come from Latin 'orobias', a type of incense.

Orobas is Monster in My Pocket #78; there, he is described as an "oracle" rather than a demon.