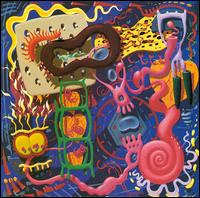 "In Sides" is the fourth album recorded by Orbital, released in 1996. The name is a reference to the fact that the album was originally available as a 3-LP vinyl box set, with one track per "side" of each LP.

"The Girl with the Sun in Her Head" was dedicated to the memory of photographer who died in 1995. The track was recorded using electricity from a solar power generator.

" "P.E.T.R.O.L." was included in the soundtracks for the video game "Wipeout" and also the film π. The title of the fifth track, "Dŵr Budr" is Welsh for dirty water. "Adnan's" was originally written for 1995's "" benefitting War Child.

American and other overseas versions of the album contained a bonus CD of tracks that had been previously released in the UK, such as "Times Fly"," "The Saint", "The Sinner", "The Box" and live versions of "Satan" and "Halcyon".

The original track listing from 1996:

The U.S. version of the record was initially packaged to include the "Times Fly EP" along with The Box EP (the latter included as a single 28-minute track):

In 1999, the reprint of the album included both tracks of The Saint single along with Irving Plaza recordings of "Halcyon" and "Satan" (previously found on Orbital's "III EP" and the "Satan Live EP"):