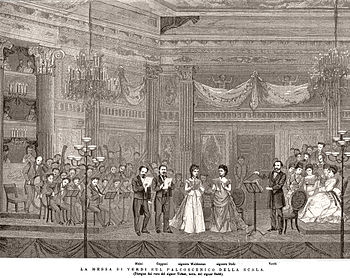 The second performance of the Requiem, at La Scala on 25 May 1874, with Verdi conducting. The soloists depicted are (left to right) Ormondo Maini, Giuseppe Capponi, Maria Waldmann, and Teresa Stolz

The Messa da Requiem by Giuseppe Verdi is a musical setting of the Roman Catholic funeral mass (Requiem) for four soloists, double choir and orchestra. It was composed in memory of Alessandro Manzoni, an Italian poet and novelist much admired by Verdi. The first performance in San Marco in Milan on 22 May 1874 marked the first anniversary of Manzoni's death. The work was at one time called the Manzoni Requiem.[1] It is typically not performed in the liturgy, but in a concert of around 85–90 minutes. 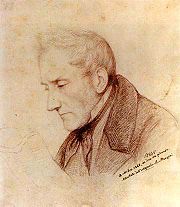 Alessandro Manzoni, in whose honour Verdi wrote the Requiem

When Gioachino Rossini died in 1868, Verdi suggested that a number of Italian composers should collaborate on a Requiem in Rossini's honor, and began the effort by submitting the conclusion, Libera me. During the next year a Messa per Rossini was compiled by 13 composers, famous at the time, of whom the only one well known today is Verdi himself. The premiere was scheduled for 13 November 1869, the first anniversary of Rossini's death.

However, on 4 November, nine days before the premiere, the organising committee abandoned it. Verdi blamed the scheduled conductor, Angelo Mariani, for this. He pointed to Mariani's lack of enthusiasm for the project, even though he had been part of the organising committee from the start, and it marked the beginning of the end of their long-term friendship. The piece fell into oblivion until 1988, when Helmuth Rilling premiered the complete Messa per Rossini in Stuttgart, Germany.

In the meantime, Verdi kept toying with his Libera me, frustrated that the combined commemoration of Rossini's life would not be performed in his lifetime.

On 22 May 1873, the Italian writer and humanist Alessandro Manzoni, whom Verdi had admired all his adult life and met in 1868, died. Upon hearing of his death, Verdi resolved to complete a Requiem—this time entirely of his own writing—for Manzoni. Verdi travelled to Paris in June, where he commenced work on the Requiem, giving it the form we know today. It included a revised version of the Libera me originally composed for Rossini.

The Requiem was first performed in the church of San Marco in Milan on 22 May 1874, the first anniversary of Manzoni's death. Verdi himself conducted, and the four soloists were Teresa Stolz (soprano), Maria Waldmann (mezzo-soprano), Giuseppe Capponi (tenor) and Ormondo Maini (bass).[2] Stolz (Aida), Waldmann (Amneris) and Maini (Ramfis) had all sung in the European premiere of Aida in 1872, and Capponi was also intended to sing at that premiere (Radames) but was replaced due to illness. Teresa Stolz went on to a brilliant career, Waldmann retired very young in 1875, and the male singers appear to have faded into obscurity. Teresa Stolz was also engaged to Angelo Mariani in 1869, but she later left him amid rumours (never substantiated) that she was having an affair with Verdi.

The Requiem was repeated at La Scala three days later on 25 May with the same soloists, and again Verdi conducted.[3] It won immediate contemporary success, although not everywhere. It received seven performances at the Opéra-Comique in Paris, but the new Royal Albert Hall in London could not be filled for such a Catholic occasion. In Venice, impressive Byzantine ecclesiastical decor was designed for the occasion of the performance.

It later disappeared from the standard choral repertoire, but made a reappearance in the 1930s and is now regularly performed as well as being a staple of many choral societies.[4]

For a Paris performance, Verdi revised the Liber scriptus to allow Maria Waldmann a further solo for future performances.[4]

Franz Liszt transcribed the Agnus Dei for solo piano (S. 437). It has been recorded by Leslie Howard. 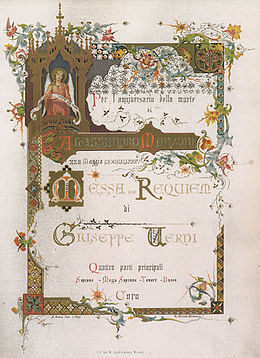 Music of the Requiem

Throughout the work, Verdi uses vigorous rhythms, sublime melodies, and dramatic contrasts—much as he did in his operas—to express the powerful emotions engendered by the text. The terrifying (and instantly recognizable) Dies irae that introduces the traditional sequence of the Latin funeral rite is repeated throughout for a sense of unity, which allows Verdi to explore the feelings of loss and sorrow as well as the human desire for forgiveness and mercy found in the intervening movements of the Requiem. Trumpets surround the stage to produce an inescapable call to judgement in the Tuba mirum (the resulting combination of brass and choral quadruple-fortissimo markings resulting in some of the loudest unamplified music ever written), and the almost oppressive atmosphere of the Rex tremendae creates a sense of unworthiness before the King of Tremendous Majesty. Yet the well-known tenor solo Ingemisco radiates hope for the sinner who asks for the Lord's mercy. Verdi also recycles and reworks the duet Qui me rendra ce mort? Ô funèbres abîmes!, from Act IV of Don Carlos, in the beautiful Lacrimosa which ends this sequence.

The joyful Sanctus (a complicated eight-part fugue scored for double chorus) begins with a brassy fanfare to announce him "who comes in the name of the Lord" and leads into an angelic Agnus Dei sung by the female soloists with the chorus. Finally the Libera me, the oldest music by Verdi in the Requiem, interrupts. Here the soprano cries out, begging, "Deliver me, Lord, from eternal death ... when you will come to judge the world by fire."

The work is scored for the following orchestra: