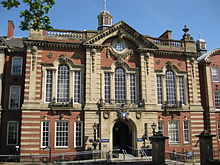 The oldest part of the building is the former Technical School, the earliest purpose-built building for what is now the University of Sheffield. Designed by Flockton & Gibbs and completed in 1886, it now lies in the centre of the building. The extensive Mappin Street frontage was also designed by Flockton & Gibbs, in a far more demonstrative style. Work began on it in 1902, but progressed in three phases and was finally completed in 1913. This part of the building includes the main entrance, the John Carr Library[1] and Mappin Hall. It is connected to the Technical School by a bridge. Part of the northern range along Broad Lane and a building behind the Technical School followed, then the connecting Engineering Building along Broad Lane, completed in 1955. This gradual accretion has produced a complex plan and floor numbering scheme: the main entrance is on floor D, with floors B, C and C* existing at lower levels in various areas of the building, and floors E, F and G lying above.