Margaret "Maggie" Thompson (born Margaret Curtis on November 29, 1942),[2] is the editor of Comics Buyer's Guide, a monthly comic book industry news magazine. Thompson and her late husband, Don Thompson (October 30, 1935-May 23, 1994), were among the instigators of what developed in the 1960s into comic book fandom.[3]

Their Harbinger (a mimeographed one-sheet published in the autumn of 1960) announced the upcoming publication of Comic Art, one of the early amateur magazines devoted to all aspects of sequential art (a term not then in use). The initial issue of Comic Art was released the following spring.[4] Seven issues were published at irregular intervals between 1961 and 1968. As publication of Comic Art wound down, they shifted their attention to a new venture as the Thompsons started a fanzine titled Newfangles in March 1967. Unlike other comics news fanzines of the time it was devoted to the doings of comics fandom instead of news about comic books and comic book professionals.[5] 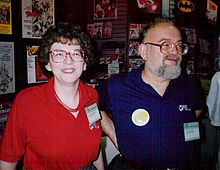 Krause later sold the movie newspaper, but she continued to edit Comics Buyer's Guide, long after her husband Don's death in 1994[4] and the transformation of the publication into a monthly magazine.

Under Maggie's editorial direction, Comics Buyer's Guide twice won the comics industry's Eisner Award for periodicals, among other awards.[3] She was a recipient of the Bob Clampett Humanitarian Award and was also the first recipient of the Friends of Lulu's "Women of Distinction" Award.

Maggie and Don Thompson were the recipients of many joint awards,[1] including: