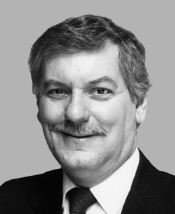 Glenn Poshard (born , in ) is a former Illinois State Senator, man, Gubernatorial Candidate, and is currently President of the system.

Poshard ran for U.S. Representative from Illinois' 22nd Congressional District and was elected in 1988, where he served until 1992 when he was forced to run in the 19th district because of . Poshard, a Democrat, represented the 19th district in the from 1993 to 1998. As Congressman, he was considered to be a social conservative and fiscal ; he was opposed to , , and the largely on religious grounds, and opposed s and encouraged fiscal responsibility.

In 1998 Glenn Poshard ran for governor against Republican Secretary of State . He was considered by many to be to the right of his centrist opponent — specifically on issues like abortion, which gained him the support of many social conservatives who would normally vote Republican.

Poshard strongly supported . In his campaign, Poshard severely curtailed contributions to his campaign, refusing to accept any corporate or special interest group donations and limiting private donations to a small amount per individual. Because of his stance on campaign finances, Poshard faced a significant financial disadvantage in the campaign against Ryan and was outspent by a roughly 4 to 1 margin.

Glenn Poshard was first to alert the public about George Ryan's connection to the "licenses for bribes" scandal and other corruption. Some individuals, even prominent Democrats like former Senator Paul Simon, criticized Poshard for his attacks on Ryan's corruption. Simon and others were proven wrong several years later when Ryan was indicted in late 2003 on 22 counts of racketeering conspiracy, mail and tax fraud, and false statements charges alleging public corruption during his terms as Illinois Secretary of State and as Governor. Ryan was subsequently convicted and was sentenced to serve six and a half years in prison.

Poshard lost the Governor's race to Ryan by a 47%-51% margin. In his concession speech, Poshard declared that "no purpose is served by anger or resentment. No good is served by dropping out of the system in the future. The time for disappointment is only for this evening. Tomorrow we go back to work."

After he left Congress, Poshard and his wife Jo founded the Poshard Foundation for Abused Children, which raises more than $100,000 annually to fund care for abused children and other victims of domestic abuse throughout southern Illinois. Among its many activities, the Poshard Foundation led efforts to construct a new $600,000 women's shelter in Cairo that opened in December 2003.

The Southern Illinois University Board of Trustees announced that they had selected Glenn Poshard to serve as President of the system on Friday, , . He took office on , . For the board to appoint its own chair to the high-paying position of university president would lead to latter charges of cronyism, especially when members of the Board of Trustees announced their support of Poshard before examining charges of plagiarism against him and then refused to initiate a review of those charges by scholars outside the university and not reporting to Poshard..

After the announcement, Governor praised the selection, stating that" [t] he Southern Illinois University Board of Trustees couldn't have made a better selection to the post of SIU President. Glenn Poshard's deep understanding of higher education in general, and the Southern Illinois University system in particular make him an outstanding choice to lead the institution. The SIU system is an important home of learning and progress in southern and southwestern Illinois, as well as an economic engine for the region. These institutions will continue to prosper in the capable and trustworthy hands of Glenn Poshard."

Similar praise was heard from leaders of the Illinois state legislature. , President of the Illinois Senate, noted that " [t] wenty one years ago a man sat down next to me in the Illinois Senate. At that time, we had little in common except our shared belief that a quality education meant equal opportunity for all. Southern Illinois University has chosen wisely in selecting my good friend Glenn Poshard."

In August 2007, Southern Illinois University-Carbondale’s student newspaper, the Daily Egyptian, published evidence that Poshard had plagiarized passages in his doctoral dissertation, completed in the University’s Department of Higher Education in 1984. [http://files.siude.com/August30Complete.pdf] This was the most dramatic in a series of plagiarism cases at SIU. [http://media.www.siude.com/media/storage/paper1096/news/2007/08/30/Campus/Poshard.Accusation.Third.In.Two.Years.For.Siu-2943609.shtml] In 2004, SIU’s Edwardsville campus summarily dismissed an untenured professor for plagiarizing his statement of teaching philosophy in a mid-appointment review. The dismissed professor, claiming that his firing was pretextual and had violated SIUE procedures, sued SIU. [See “The Rumor” by Thomas Bartlett, The Chronicle of Higher Education, 10 February 2006, available to subscribers at [http://chronicle.com/weekly/v52/i23/23a00801.htm] ] A group of supporters, terming themselves "Alumni and Faculty Against Corruption at SIU” (AFAC) and concerned with capricious and arbitrary administrative decisions, [See “Plagiarism Watchdogs Say They Only Want Fair Play” by Caleb Hale, The Southern Illinoisan, 9 December 2006. See also pp. 21-23 of SIU Board of Trustees minutes of 11 January 2007 [http://www,siu.edu/bot/meetings/2007/0107minutes.pdf] . As an example of possibly capricious and arbitrary standards, AFAC showed that nearly identical plagiarism of a statement of teaching philosophy by an SIUC professor, recipient of an outstanding teaching award, was treated as inconsequential by administrators. See “The Rumor” above and the opinion piece “SIUC Should Treat Employees Better” in the Daily Egyptian [http://media.www.siude.com/media/storage/paper1096/news/2006/09/12/Voices/Column.Siuc.Should.Treat.Employees.Better-2266409.shtml] ] gathered evidence of other instances of plagiarism by SIU faculty and staff, the most prominent among which involved the chancellors of the two campuses. Later, AFAC discovered that significant passages from SIUC’s new strategic plan, “Southern at 150," were borrowed from Texas A&M’s “Vision 2020.” After The Chronicle of Higher Education had learned of this, but before it had the particulars, Poshard was approached by an SIUC faculty member with a request that he review the case of the fired SIUE professor to determine whether university procedures had been properly followed. He refused, characterized the request as extortion, [“SIUC professor asks Glenn Poshard to withdraw ‘slanderous statements’” by Caleb Hale, The Southern Illinoisan, 19 January 2007.] and, several months later, termed members of AFAC “academic terrorists” before SIUC faculty constituency groups. [The substance of Poshard’s meeting with the SIUC faculty member is disputed by the parties. See “I’m not a terrorist” by Sean McGahan, Daily Egyptian, 16 January 2007 [http://media.www.siude.com/media/storage/paper1096/news/2007/01/16/Campus/im.Not.A.Terrorist-2633092.shtml] and pp. 18-20 and 24-25 of SIU Board of Trustees minutes of 11 January, 2007 [http://www,siu.edu/bot/meetings/2007/0107minutes.pdf] ] An unknown source linked to AFAC subsequently supplied The Daily Egyptian with evidence of problems with Poshard’s own scholarly work. [http://www.stltoday.com/stltoday/news/special/srlinks.nsf/story/88AD7B97C95833B3862573480076C4DC?OpenDocument]

As The Daily Egyptian showed, numerous passages in Poshard's dissertation had been taken from other sources without either quotation marks or citations or both. [http://files.siude.com/August30Complete.pdf] . On September 10, The Chronicle of Higher Education reported that "There are so many examples of such practices that the dissertation seems as if it has been cut-and-pasted from other sources" [http://chronicle.com/daily/2007/08/2007083103n.htm] . The Chronicle soon noted similar, if less extensive, problems with Poshard’s master’s thesis. [http://media.www.siude.com/media/storage/paper1096/news/2007/09/10/WebExtras/More-Plagiarism.Allegations.Against.Poshard.Surface-2959009.shtml]

Poshard responded to the evidence by admitting there might have been citation errors, but claiming that citation practices in his department at the time were casual and noting that his dissertation committee had approved his work. In a taped interview with The Southern Illinoisan, he suggested that, had he intended to hide his scholarly debts, he would not have cited the sources of most plagiarized sections in close proximity. He also suggested that though he “would never offer it up as an excuse...at that point in my life, I had a family. I worked two jobs. I was running for the Illinois State Senate. I was trying to get my dissertation finished." [http://media.www.siude.com/media/storage/paper1096/news/2007/10/01/WebExtras/Poshard.Defends.Dissertation.Against.Plagiarism.Charges-2943746.shtml] [The interview is no longer available on The Southern Illinoisan website, but see “Poshard begins defending himself” by Scott Fitzgerald, 31 August 2007. ]

Several public figures joined the SIU Board of Trustees and the local newspaper, The Southern Illinoisan, in coming to Poshard’s defense. Senator Dick Durbin issued a statement calling Poshard "an extraordinary person whose talents and integrity have made him one of the most effective university presidents I have ever worked with." [http://www.wandtv.com/Global/story.asp?S=7058150] . Williamson County District Attorney Charles Garnati published letters in the Southern Illinoisan and the Daily Egyptian suggesting that members of AFAC be investigated. [http://media.www.siude.com/media/storage/paper1096/news/2007/08/31/LetterToTheEditor/Letter.Who.Are.The.Members.Of.Afac-2945641.shtml]

Press reaction outside the Southern Illinois area was less positive. The Chicago Tribune [http://media.www.siude.com/media/storage/paper1096/news/2007/09/11/TheirWord/The-Accidental.Plagiarist-2959644.shtml] and the St. Louis Post-Dispatch condemned Poshard, siding with the student newspaper, which had expressed dismay over the official response to his plagiarism. [http://media.www.siude.com/media/storage/paper1096/news/2007/10/15/OurWord/Our-Word.The.p.Word-3031159.shtml] The Faculty Senate at SIUE passed a resolution asking Poshard to resign, [http://media.www.siude.com/media/storage/paper1096/news/2007/11/06/Campus/Siue-Group.Releases.Statement.On.Poshard-3079937.shtml] whereas faculty constituency groups at SIUC remained silent. Poshard’s revised dissertation was accepted by his department and by the University in December 2007. [http://www.southernillinoisan.com/articles/2007/12/21/top/22682052.txt] The suit by the fired SIUE professor was settled out of court in April 2008. [http://www.stltoday.com/stltoday/news/stories.nsf/education/story/89BAA33A97B1CE82862574290005B8B4?OpenDocument]