The foundation is focused primarily on supporting education and medical research.

Among the foundation's initiatives are:

The Milken Educator Awards has created a network of more than 2,400 teachers who have served as resources to policymakers, researchers, the media and general public on their subject areas.

The TAP system was profiled in Education Week for its comprehensive approach to school reform.[1] The Center for American Progress released "Aligned by Design," a report by education researcher Craig Jerald that elaborated on this concept to specifically show how TAP's elements work together.[2] South Carolina TAP was featured in TIME Magazine's February 2008 cover storyj.[3] In 2006, BusinessWeek ranked TAP on its Top 10 List of Best Practices.[4]

TAP's operating organization, the National Institute for Excellence in Teaching collaborates with other national education groups on teacher effectiveness issues. More than ten organizations co-wrote Creating a Successful Performance Compensation System for Educators, which lays out the essentials for an effective, comprehensive reform system.[5] 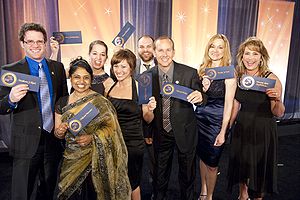