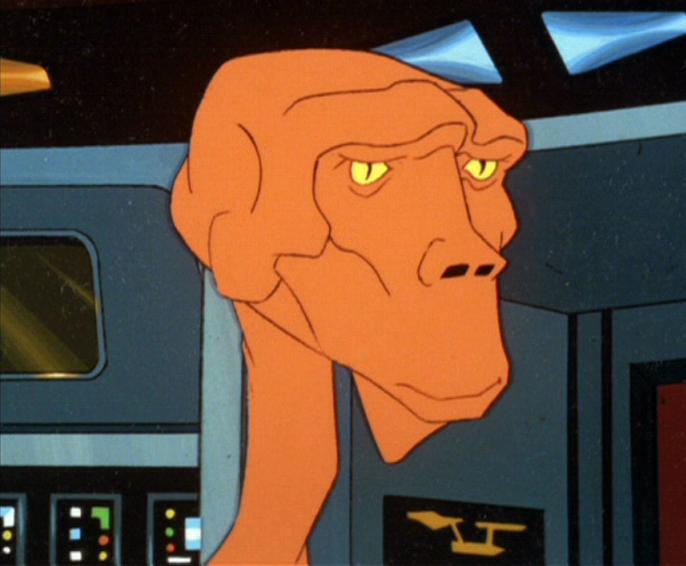 Caption = Arex on the bridge of the "USS Enterprise"
Species = Edosian or Triexian
Gender = male
Birth =
Death =
Planet =
Affiliation =
Posting = USS "Enterprise"
Position = Navigator
Rank = Lieutenant
Portrayed = Lieutenant Arex, voiced by , was a recurring character on "" which ran on from 1973 to 1974.

Arex was a officer assigned to the U.S.S. "Enterprise" as navigator. Arex was a member of a tripodal species (the Edosians) and had three arms and legs. Arex also sometimes took the conn, but he rarely left the ship on landing party missions.

The slugs used in Dr. Phlox's medical bay on "" are "Edosian slugs".

Arex was referred to in one scene in 's 1980 "Star Trek" novel "The Galactic Whirlpool", and in 's 1988 novel "Time for Yesterday", a reference is made to a Commander Arex. He, along with Lt. M'ress, also appeared in the 1980s "Star Trek" comics published by .

Arex was introduced into 's "" series of novels, with the full name of Arex Na Eth, via a timewarp. He appears, along with , also the victim of a separate time-warp, in the 24th Century. He is given a post aboard the U.S.S. "Trident", under . He first appeared in "Gateways: Cold Wars", and returned for each installment in the "New Frontier" series since then. According to the New Frontier novels, Arex is a Triexian, rather than an Edosian. Arex also appears in issue five of the IDW comic "Star Trek: Year Four", a canon Fact|date=March 2008 continuation of the original series' five year mission.