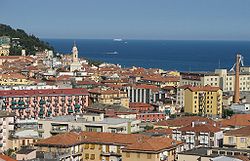 Oneglia (Inéja in Ligurian) was a town in northern Italy on the Ligurian coast that was joined to Porto Maurizio to form the Comune of Imperia in 1923.[1]

Oneglia became a papal domain in the 8th century after the Lombards transferred control of the town to the pope.[1] Oneglia suffered from a Muslim attack during this time.[1] However, it later recovered as the town of Ripa Uneliae, and was governed by the bishop of Albenga.[1] The Doria Family purchased Oneglia and Porto Maurizio in 1298.[1] The Dorias ruled the town until the 1500s (there were some brief interludes in which the Doria did not rule the town during this time).[1] One of the Dorias, Andrea Doria, was born in Oneglia in 1466.[1]

In 1576 Oneglia and Porto Maurizio became part of the domain of the House of Savoy.[1] The Savoyards attempted to develop Oneglia as a major port[1] and the Savoyards and Genoese struggled for control of Oneglia during the Second Genoese-Savoyard War.[2] Oneglia resisted Napoleon during his invasion of Italy.[1] As a reward, it was made seat of the province in 1814 but in 1860 became part of the province of Porto Maurizio until 1923.[1]