Curvularia is a hyphomycete (mold) fungus which is a facultative pathogen of many plant species and of the soil. Most Curvularia are found in tropical regions, though a few are found in temperate zones.

Curvularia defined by the type species C. lunata (Wakker) Boedijn. Curvularia lunata appears as shiny velvety-black, fluffy growth on the colony surface. C. lunata is distinguished by septate, dematiaceous hyphae producing brown, geniculate conidiophores. The poroconidia are curved slightly to distinctly, transversely septate, with an expanded third cell from the pore end of the conidium. Curvularia can be easily distinguished from Bipolaris and Drechslera spp. since the conidia are non-distoseptate, that is, septate from edge to edge of the conidial wall. The teleomorphic state of the type species Curvularia lunata is Cochliobolus lunatus (Fam. Pleosporaceae, Ord. Pleosporales, Cla. Loculoascomycetes, Phy. Ascomycota).

Curvularia protuberata is an endosymbiote of panic grass (Dichanthelium lanuginosum) that enables it to thrive near hot springs in soil temperatures of up to 104° F (40° C). The fungus confers this protective effect only when itself infected by the Curvularia thermal tolerance virus (CThTV). Plants unrelated to panic grass also experience this protective effect when inoculated with the virus-infected fungus.[1] 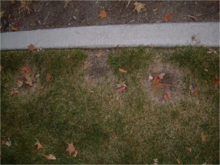 Primary species of Curvularia commonly found in soils and on plant tissues (including seeds):