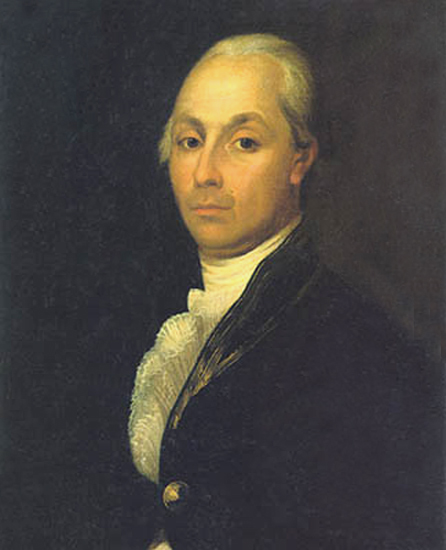 Aleksandr Nikolayevich Radishchev ( _ru. Алекса́ндр Никола́евич Ради́щев) (, &ndash;, ) was a n author and social critic who was arrested and exiled under . He brought the tradition of radicalism in to prominence with the publication in 1790 of his "". His depiction of socio-economic conditions in Russia earned him exile to until 1797.

Radishchev was born into a minor noble family on an estate just outside of . His youth was spent with a relative in Moscow, where he was allowed to spend time at the newly established . His family connections provided him with an opportunity to serve as a page in Catherine's court, where his exceptional service and intellectual capabilities set him apart. Because of his exceptional academic promise, Radishchev was chosen of one of a dozen young students to be sent abroad to acquire Western learning. For several years he studied at at the . His foreign education influenced his approach to Russian society, and upon his return he hoped to incorporate Enlightenment philosophies such as and the to Russian conditions. He lauded revolutionaries like and praised the early stages of the . His most famous work - "A Journey from St. Petersburg to Moscow" - is a critique of Russian society. He was especially critical of serfdom and the limits to personal freedom imposed by the autocracy.

Catherine the Great read the work, viewed Radishchev's calls for reform as evidence of -style radicalism, and ordered copies of the text confiscated and destroyed. He was arrested and condemned to death. This sentence was later commuted to exile to Siberia, though before his exile he underwent both physical and psychological torture. He was freed by Catherine's successor Tsar Paul, and attempted again to push for reforms in Russia's government. Under the reign of Alexander I, Radishchev was briefly employed to help revise Russian law, a realization of his lifelong dream. Unfortunately, his tenure in this administrative body was short and unsuccessful. In 1802 a despondent Radishchev - possibly threatened with another Siberian exile - committed suicide by drinking .