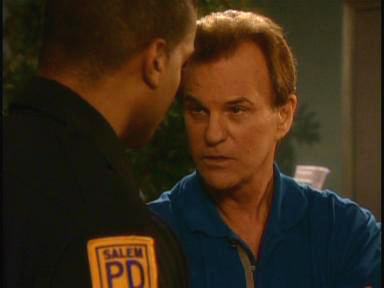 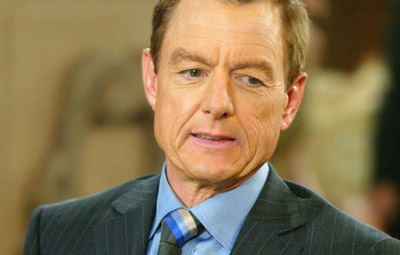 Roman Augustus Brady is a on the television drama "". Roman was played by from - and -, and has been played by since , with a brief hiatus in early , when he was a victim of the show's now-infamous storyline. played Roman Brady from -, until Northrop returned to the show and it was revealed in a somewhat convoluted storyline that Hogestyn's character was not the true Roman Brady.

Hogestyn's portrayal of Roman was into a new separate character, that of John Black (born Ryan Brady, adopted name Forrest Alamain), an amnesiac mercenary employed by his half-brother and Roman's arch-nemesis, international , who had brainwashed John into believing he was Roman. This happened after Roman was believed to have been killed at Stefano's hand, and John was assigned to "replace" Roman, apparently to wreak all kinds of havoc among the Brady family as well as infiltrating the police, while holding the real Roman captive in a Mexican prison. Unfortunately for Stefano, John adapted to his "Roman" persona so well, he became a loyal and dedicated member of the Brady family and the Salem community, and ultimately Stefano's own worst enemy. Some watchers and fans now refer in retrospect to Hogestyn's character from - as "Roman II", "RoJohn", or "faux Roman" (or "FauxMan").Roman Brady first appeared on Days to protect Marlena Evans from a serial killer. He slept on her floor. The chemistry between the actors, and the characters, led to love. In 1983 on Days Roman and Marlena were married. They were one of the SuperCouples of the time. In a strange turn, one of Roman's groom's men was portrayed by Josh Taylor, who since 1997 has portrayed Roman. Over the next year Roman became embroiled in a storyline with Stefano Dimera. Dimera was a crime figure from Europe who had come to town, and Roman being the top cop had gone after him. Subsequently Stefano framed Roman for serial killings that were being committed by his nephew Andre Dimera. At the time Marlena saw Roman killing a woman. Later it was shown that Andre had used a realistic mask. Roman was jailed. Mrs. Alice Horton baked him some drugged doughnuts, and on the way to the hospital Roman escaped. He went on the run to prove his innocence, and he accomplished that. He was promoted, and Stefano was on the run.

In November 1984 Roman tracked Stefano to an island. Many other characters had crash landed too. Stefano was suffering from incurable cancer, and needed three prisms, to cure himself. Roman caught up to him on a cliff, but Stefano pulled a gun. He shot Roman, who seemingly fell to his death. His brother Bo cradled him in his arms, but had to leave him for a few minutes. When he returned the body was gone. Several episodes later Roman's body was shown aboard Stefano's yacht.Near the end of 1985 the "pawn" John Black came to Salem to usurp Roman's identity. He lived Roman's life for over 5 years, until the real Roman was found on an island, where Stefano had imprisoned him. Roman was shocked when he found he had been impersonated and all his family had accepted the imposter. This was August 1991. Roman went back to his life, and he and Marlena tried to live once again as man and wife, but Black would not accept that he was not Roman, and that "Doc" was not his. He and Marlena had an affair that crushed Roman. In 1994 Roman (Wayne Northrop)left town broken, once again with no family. Stefano's revenge was long lasting. Later it was said that Roman had died on a mission for the ISA. In 1997 Josh Taylor was brought in as Roman, who was revealed alive. Taylor is a minor player on the show, never to have the impact that Northrop had.

Roman was "killed" during the Salem Stalker Murders in 2004. Of course, Roman wasn't really dead. He lived on the island of Melaswen (New Salem) with every other victim from the Salem Stalker Murders, including Marlena. Eventually, other Salemites arrived on the island, trying to find their "dead" loved ones. Some of them went out in the jungle, looking for a way off the island, while the rest remained in "Salem" waiting for help. Help finally arrived. Jennifer got to the island, then Hope and Patrick and finally Bo and John. Everyone banded together to get off the island, but Tony wasn't going to make it easy. He created a volcanic eruption, which eventually caused a giant wave. As everyone gathered on makeshift rafts to get off the island, the wave crashed over them. The Coast Guard arrived and managed to rescue some of them, but Roman, Marlena, Jack, and Cassie were not saved. They were in the clutches of Tony DiMera once again, and he took them to a remote European castle where he held them captive.

While in the castle, Tony tormented Roman and Marlena with video of John and Kate growing ever closer back in Salem. Eventually, they believed the two of them had made love, and Roman and Marlena, needing comfort, made love, as well. Shortly thereafter, Jack made his way into their room. They escaped! Through fire and explosions, our group of intrepid Salemites – Marlena, Roman, Jack and Cassie – all got out and were on their way home!

On the ISA jet on the way back to Salem, Roman and Marlena made the decision to not tell Kate and John that they had made love. Marlena was uncomfortable with lying to John, but eventually agreed with Roman. When they arrived back they were shocked to learn that John and Kate had fallen in love and were engaged to be married, but Roman and Marlena still didn't tell the truth about their affair. Soon after they were back Marlena discovered that she was pregnant and that Roman had to be the father, but when the truth came out John wasn't too forgiving. During a fight between Roman and John, Marlena tumbled down the stairs causing a miscarriage.

Roman is a police captain and detective in the fictional midwestern town of Salem. He is also a former agent with the fictional International Security Alliance (ISA), a spy agency focused on the unusually high-level and global criminal conspiracies that tended to center around his otherwise-quiet home town. During his portrayal by Northrop, he was established as a top-notch cop but also a bit of a renegade, often accepting deep-cover assignments, and a master of disguise. Hogestyn's character was more by-the-book on the job, although still dangerous with a dark side somewhat characteristic of an ex-spy (which later fed into the "John Black" persona), and more of a ladies' man. Taylor's portrayal is more that of a "regular guy", with a bit less intrigue and more straightforward professionally, although still with an eye for the ladies and more inclined to engage in a than the character as portrayed by Northrop or Hogestyn (with women such as Kate Roberts, Billie Reed, ex-wife Anna DiMera, and a strongly-hinted-at [but never confirmed] rendezvous with Nicole Walker).