The Jewel of the Nile

The Jewel of the Nile

Infobox Film
name = The Jewel of the Nile 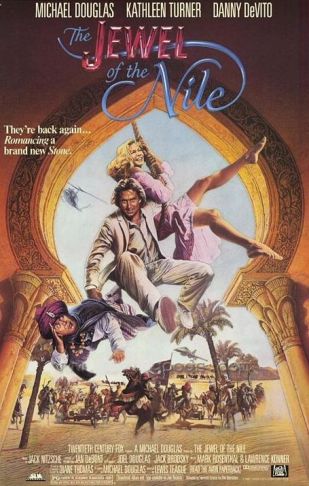 
"The Jewel of the Nile" is a to the 1984 romantic adventure "" featuring , , and , the stars of the first film. Released in 1985, it sends their characters off on a new adventure in a fictional ern desert, in an effort to find the precious "Jewel of the Nile."

Like , the opening scene takes place in one of Joan's novels. But this time, instead of Joan's wild-west supercouple, Jesse and Angelina, Joan and Jack are the featured heroes. As the movie starts Jack and Joan are on an old sailing ship. They're getting married. Suddenly, pirates attack the ship. Jack leads a brief counterattack against the pirates, but eventually the pirates take the ship and the survivors must get to the lifeboats. By the time Jack and Joan reach the lifeboats, there's only room enough for one more. Joan gives the seat to Jack and he leaves without her. Now she's alone and surrounded by pirates. It seems she's doomed. And then...

We return to reality, where Joan is sitting on the deck of the Angelina, struggling to finish her novel. Frustrated, she gives up and tosses her typewriter overboard. As it sinks to the bottom, it descends past a diver, then observes him as he places an object against the hull of the Angelina...

Joan Wilder () is having trouble writing her next romantic novel while living with Jack Colton () on his boat, the Angelina, and refuses to discuss marriage. At a book signing engagement she meets a charming Arab ruler named Omar () that has managed to persuade the world that he is a firm, but fair, ruler of a fictional Middle Eastern nation. Omar offers Joan the opportunity to live like a queen at his palace, while she writes a fluff piece about him. However, as soon as Joan leaves with Omar, Jack runs into Ralph (). Ralph, recently out of prison, plans on killing Jack, but is stopped by an Arab named Tarak (), who tells Jack of Omar's true intentions. This includes the fact that he has their greatest treasure, the Jewel of the Nile, in his possession. Ralph, immediately interested at the prospect, agrees to help find the Jewel. Jack, however, is less than convinced. But seconds later, the Angelina explodes, having been sabotaged under Omar's orders. He then agrees to team up with Ralph and Tarak in order to track down the lost jewel in Omar's kingdom.

In the fabled kingdom, Joan discovers that Omar is a brutal dictator, that imprisons her until she agrees to finish the fluff piece that will introduce him to the world as an enlightened ruler that will unite the world. In the palace jail she meets a holy man, Al-Julhara, (), who is in fact the Jewel of the Nile. The pair escape the palace, and with the help of Jack are able to flee Omar's army into the desert. Ralph, who provides much of the film's comic relief, is left to fend for himself in the desert and thus joins with the rebel Sufi tribe led by Tarak that has sworn to protect the Jewel so he can fulfill his destiny.

After a battle with a mountain n tribe, Joan breaks the news to Jack, that the Jewel is in fact Al-Julhara who is the spiritual leader of the Arab people (). Omar plans on using a British rock & roll technician's smoke and mirrors special effects at an upcoming festival, planned by Omar, to convince the Arab world that he is in fact a prophet that will unite the Arab world under his rule. Jack, Joan and the Holy Man decide to crash the festival and unmask Omar as the fraud that he is. Once Omar is killed, the Holy Man rises as the real spiritual leader and Jack and Joan are finally married by Al-Julhara himself. Ralph laments sadly that once again, he has nothing to show for his efforts. But he is then acknowledged as being a true Sufi by Tarak, signified by being presented with a priceless jeweled dagger. Ralph is genuinely touched and happily accepts the gift. The film ends with Jack and Joan sailing down the Nile as Al-Julhara and his people, along with Ralph, Tarak, the Sufi and Joan's publisher, Gloria wave goodbye from the river's dock.

While "The Jewel of the Nile" grossed nearly as much as its predecessor, [ [http://www.boxofficemojo.com/movies/?id=jewelofthenile.htm Box Office Mojo: "The Jewel of the Nile"] ] the film was much less successful critically and helped to effectively kill the franchise (thus scrapping the proposed sequel, "Crimson Eagle", which never got past the development stage), although it was said at the time that both and only made the sequel because they were contractually obligated to do so.

Critics felt the film was loaded with numerous plot holes and that it lacked the first film's original charm. "" opened its review by writing, "There's nothing in "The Jewel of the Nile" that wasn't funnier or more fanciful in ""." [cite web | url = http://movies2.nytimes.com/mem/movies/review.html?res=9B06E7D9173BF932A25751C1A963948260 |date = 1985-12-11 | title = Film: 'Jewel of the Nile' | publisher = by Janet Maslin, "The New York Times". | accessdate = 2007-02-09] agreed that "it is not quite the equal of "Romancing the Stone," but praised the interplay between Douglas and Turner. "It seems clear," he wrote, "that they like each other and are having fun during the parade of ludicrous situations in the movie, and their chemistry is sometimes more entertaining than the contrivances of the plot."

"", performed by , plays during the film's end credits.

* As with the first film, the of the sequel was credited to Joan Wilder.
* "The Jewel of the Nile" was the final film released on the video format.
* Even though the movie was rated PG, on Fox Movie Channel it was rated TV-MA LSV.