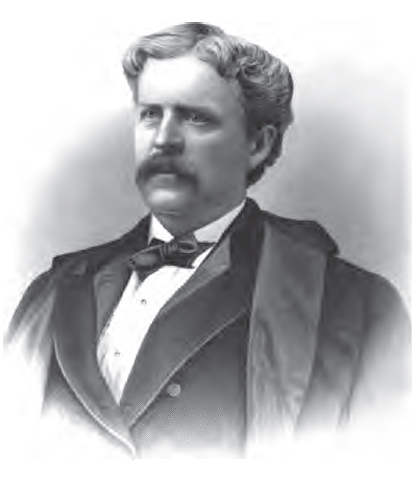 Hannibal Ingalls Kimball (, &ndash; , ) was an American entrepreneur and important businessman in post-war .

Born in to family of wheel-wrights. He was the fifth boy of 10 children by his father,, a highly regarded wheel-wright, and his mother, Betsey Emerson.

He stayed in that and the carriage business moving first to then later to the largest carriage manufacturing center, where he partnered with his brothers to form a company that was later taken over by .

The carriage company flourished and by 1860 over 300 people worked there. Kimball and also invented a top-prop for carriages. The patent was issued on ,

In 1858, Kimball married the eldest daughter of his business partner, . Kimball then moved to as the agent for a mining company and regained his fortune. While in Colorado, he met who hired him in 1866 to establish the 's sleeping car lines in the South. Though initially to be headquarted in , he thought it would be more prosperous in Atlanta and moved his family there in 1867.

One of his first orders of business in Atlanta, was helping to convince the constitutional convention of Georgia to move the state capital from Milledgeville to Atlanta in 1867. In 1868, shortly after the congress agreed to move the capital, Kimball purchased an abandoned opera house and constructed the first capitol building. The building was completed in only 4 months, after which it was leased to the city who agreed to furnish the building without cost to the state for 10 years. The next year, the purchased the building with the city paying $100,000 for part of the cost permanently making Atlanta the capital of Georgia.

On , , Kimball along with , , , and incorporated the Atlanta Canal and Water Company. The company had previously been incorporated to cut canals from the into and throughout the city streets for sanitary and other uses. However, the previous company had not completed any work on the project. The new Atlanta Canal and Water Company would thus construct Atlanta's first sewer system.

In 1870, the city contracted Kimball to construct the grounds and buildings for an agricultural fair to be held that year. The project required over 60 acres of forest to be clear and buildings developed on the site. Six months later, Kimball completed the project and turned the project back over to the city and the State Agricultural Society. He was later contracted by the city again to manage the fair which had over 20,000 visitors in one day.

One thing that Atlanta lacked prior to the fair was suitable accommodations for visitors. Thus, on Kimball purchased the old lot and built "The H. I. Kimball House". The hotel cost $675,000 to build. Wallace Putname Reed, an Atlanta historian once declared that it was "equal in all respects to the fifth Avenue Hotel in New York and far superior to anything in the South."

Once the hotel was completed, Kimball turned his efforts towards the improvement of the surrounding areas. The area of Atlanta bound by Pryor, Decator, Lloyd, and Alabama streets was home to an old railroad car shed that was in disrepair. Another area known as the "Mitchell heir property" was reclaimed by the heirs of under protest of the government after the railroads abandoned the land. The city claimed that it had a right to the land since it was originally traded for a different property. Kimball, seeing the detriment to his own property by these other lands, paid the city for the lands and build a new rail depot.

Along with the depot, Kimball also built tracks along Alabama street that resulted in the warehouse district moving to that location. He widened Pryor Street and constructed Wall Street. Capitalists came from New York,Boston, and beyond to invest in the area leading to $100,000 in profit for Kimball.

Kimball was also active in railroad construction throughout Georgia and the South. He was at one point president of 9 different railroad companies. And by 1871, he had constructed some convert|300|mi|km of track. Kimball lost most of his railroad interests shortly after the in 1871.

Kimball did little in the years after his railroad business failed. But eventually, he returned to the business scene and founded the Atlanta Cotton Factory. In 1880, a letter from of Boston was posted in the "New York Herald" suggesting that a cotton exposition be held in the South. Kimball seized the idea and invited Adkinson to come to Atlanta and help him rally support. The state legislature soon agreed to the idea and made Kimball Director-General of the 1881 .

Kimball was in on , when a letter arrived notifying him that the had burned to the ground. Luckily, the fire fighters were able to contain the fire and no other buildings and no lives were lost. By , he began building a new hotel that was to be larger and finer than the previous one. The new H. I. Kimball House was completed on , .

Quickly thereafter, at the dedication ceremony of the new chamber of commerce building, Kimball's friend proposed the holding of a great commercial exposition in the city to be held not 2 months later. Kimball was made chairman of the exposition and proceedd to travel around the country gaining support for the effort. The exposition commenced with over 500 delegates from 33 states who met in the on , .

In 1884, Kimball secured funding to purchase convert|200|acre|km2 of land fronted on West Peachtree Street and running west along North Avenue and turn it into roads and residential housing. A company was organized to manage the property with as president and Kimball as general manager. This land would later be the site of the , then known as the Georgia School of Technology.

He was a major figure there until scandals at the end of Radical Republican power in the early 1870s but he made two significant returns to town.Fact|date=June 2008