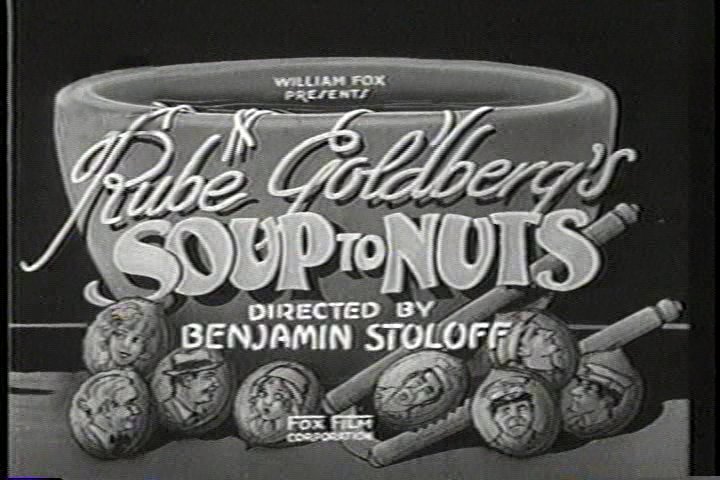 "Soup to Nuts" is a 1930 written by and directed by , which marks the film debut of the comic trio who would go on to become known as the . Goldberg made a cameo appearance in the film as himself, opening letters in a restaurant.

is a salesman for the Schmidt Costume Shop who likes to hang out at the fire station where Moe, Larry and Shemp (along with ) work. Old man Schmidt spends more time building crazy inventions (typical of devices by writer/cartoonist Rube Goldberg) than tending to his business, as a consequence he is bankrupt and is taken over by his creditors, who send a young man named Carlson to manage his business. Carlson immediately falls for Mr. Schmidt's niece, Louise, but she resists him.

Meanwhile, a certain General Avocado wants to organize a revolution and comes to the costume shop to order uniforms. Ted also swings a deal with the Fire Department to supply costumes for the fireman's ball. Carlson wants to take Louise, so Ted hatches a plan to take Louise, and have himself and Carlson dressed alike, then switch places at the ball. When Louise learns of the switch, she runs back to the shop and locks herself in her room. Carlson chases her home, and unknowingly starts a fire while trying to persuade her to come out. The firemen (the Stooges) arrive to extinguish the blaze — with the unexpected help of one of Old Man Schmidt's inventions — and at last Louise and Carlson are a couple.

This film was released before the started their own film career "without" . is the third Stooge since the film was shot before he left the act and was replaced by his and Moe's younger brother (when Curly was debilitated by strokes years later, Shemp reluctantly abandoned his solo career and returned to the Stooges). In "Soup To Nuts", Shemp appears to be the "leader" of the three. He has most of the dialogue and does a lot of the pushing and hitting. Plus, Shemp was billed before the other two in the credits. Also note that Moe was credited as "Harry Howard."

In the film, the Stooges use one of their longest running gags. This same gag was used not only in many of their short films but also in their final feature film "".
* "Is there gas in the tank?"
* "The arrow points half way. I don't know if it's half empty or half full."