The U.S. Army Combined Arms Support Command (CASCOM), a major subordinate command of the Training and Doctrine Command (TRADOC), is located at Fort Lee, Virginia. Underneath CASCOM Headquarters is the Sustainment Center of Excellence (SCoE).

The recent establishment of the Sustainment Center of Excellence under CASCOM does not eliminate the duties and responsibilities of CASCOM Headquarters. CASCOM continues to train and educate Soldiers and Civilians, develop and integrates capabilities, concepts and doctrine, and executes functional proponency to enable the Army’s Sustainment Warfighting Function.

On October 10, 1994, CASCOM was reorganized. The combat developments, doctrinal concepts, evaluation and standardization, and training developments functions at the Quartermaster, Ordnance and Transportation branch schools were centralized at CASCOM headquarters at Fort Lee, Virginia. The school brigades at these branch schools were now focused on branch-specific instruction.

The 2005 Defense Base Closure and Realignment (BRAC) recommended the creation a Combat Service Support Center (consolidation of the Ordnance, Quartermaster, Transportation Centers and Schools) at Fort Lee. Under this BRAC the Transportation Center and School moves from Fort Eustis, Virginia, the Ordnance Center and School from Aberdeen Proving Ground, Maryland, and the Missile and Munitions Center from Redstone Arsenal, Alabama.

As a result of this BRAC action CASCOM Headquarters has taken on the additional role for providing oversight for the "Sustainment Center of Excellence". Under BRAC a new headquarters building was constructed as well as major ongoing construction projects in support of bringing the Ordnance and Transportation Schools to Fort Lee. As part of the creation of the SCoE, the Army Logistics Management College (ALMC) has become the Army Logistics University (ALU) where professional development training will take place for logistics officers, warrant officers, non-commissioned officers and civilians. 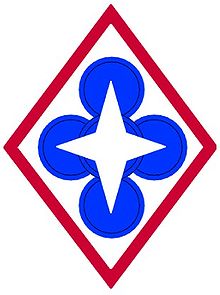 Shoulder Sleeve Insignia. Description: On a white lozenge shape 2¼ inches (5.72 cm) wide and 3 inches (7.62 cm) high, edged with a 1/8 inch (.32 cm) scarlet border, a quatrefoil of four blue discs each edged with a dark blue ring surmounted at center with one of the like, overall a four-pointed white star. 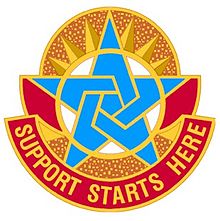 Distinctive Unit Insignia. Description: A gold color metal and enamel device 1⅛ inches (2.86 cm) high overall, on a white disc bordered by a gold ring, a stylized blue five-pointed star overlaid at the tips by the gold ring between, at top, a gold corona of six rays, and below a red scroll inscribed "SUPPORT STARTS HERE" in gold letters. 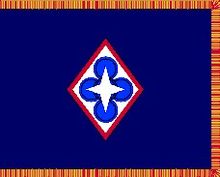 The flag for the Combined Arms Support Command and Fort Lee is National flag blue with yellow fringe. The shoulder sleeve insignia is centered on the flag (TIOH drawing 5-1-307).