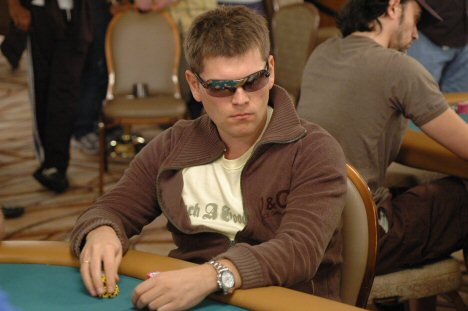 Kirill Gerasimov (born in ) is a n professional player.

Gerasimov worked as an insurance salesman in Moscow, and started entering s throughout in 2001. The Paradise Poker website backed Gerasimov in the season 1 $25,000 championship event, where he took 2nd place to to take home a $506,625 prize.

In May 2003, Gerasimov made his first (WSOP) final table, finishing 6th in the $1,500 No Limit Hold-Em event and receiving a $24,000 prize. Other finalists in the tournament included eventual winner , and Brad Daugherty.

Gerasimov made two final tables during the second season of the (EPT), finishing 5th in and 3rd in .

Gerasimov was mentored in poker by . Gerasimov himself went on to mentor former tennis professional in poker.

Since he became a noted player for his 2nd place finish in the WPT season 1 championship, many people have noted he has similar facial characteristics to .

As of 2008, Gerasimov has made over $2,000,000 in live tournament winnings. Prior to 's 2007 performance at the WSOP, Gerasimov was number one on the Russian all time winning list.

Kirill is also known in poker circles for making one of the most amazing calls in WSOP history when after thinking his opponent had checked he in turn checked and then showed his opponent his hand which consisted of a ten-high, missed flush draw. His opponent then claimed that he himself had not checked and after a floor ruling was allowed to bet. He bet all in and Gerasimov, feeling that this was a bluff, called winning the pot with his ten high.