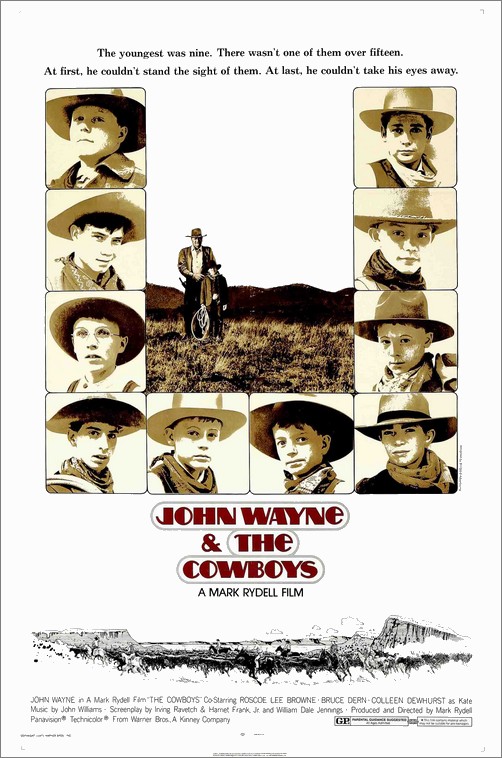 "The Cowboys" is a western motion picture starring , , , and . makes his film debut. Based on the novel by William Dale Jennings, the screenplay was written by Irving Ravetch, Harriet Frank Jr., and Jennings, and directed by .

When his hired men abandon him for the lure of the gold on the , almost to the Beaverhead River, in the mid 1870s, a central cattle rancher near the town of Bozeman, Wil Andersen (Wayne), faces the prospect of financial disaster if he can't find any s for his yearly 400-mile long to the at .

Andersen goes looking for help at the other ranches in the area, but can't find any help. He rides into a deserted Bozeman and goes to the saloon and provisions store of Anse Peterson (Pickens). Anse seems to be the only man left in Bozeman, the gold fever has taken every able bodied man to the Ruby. Anse suggest that Wil put off the drive to next year and take credit from stores to see him through. Andersen refuses to "go on take". As the two men pass the schoolhouse, Anse thoughtfully suggests that Andersen hire the local school boys as cowboys. Anse gets Wil to go to the school to look. The two men observe for a few minutes but, after Homer (Mike Pyeatt) scares a young girl with a frog, Wil leaves having seen enough and unconvinced.

Soon Anse tells the schoolboys about Andersen's need, and the boys show up at daybreak one morning. They admit to not being true cowboys, but they say that they can all ride, most can rope, and a couple are pretty good shots. To test the boys Andersen says that if the can stay on a green-broke horse, named Crazy Alice, to a count of ten, he'll keep that in mind come hiring time.

As the boys are taking turns on Alice, another young man, Cimarron (A Martinez), shows up. Cimarron is Hispanic, cocky, older than the others, and doesn't go to school. Cimarron rides the fight out of Alice, and insultingly hands the reins to Charlie Schwartz (Stephen R. Hudis), saying he can handle her now. Charlie says, "keep it", Cimarron swings at Charlie, and Slim Honeycutt (Robert Carradine) jumps on Cimarron and two start to fight. Andersen, who is impressed with his handling of Alice, has to think about Cimarron because he can tell the young man has something to prove.

After thinking about it for some time, with some help from his wife, Annie (Sarah Cunningham), who reminds him of what he was like at that age, and thinking about his two late sons, Matthew and Lucius, Andersen changes his mind. He goes to the schoolhouse again and tells the boys to show up, at the ranch, the first Monday after school is out. When the day comes, the boys are there at the ranch, and so is Cimarron, but after he pulls a knife while fighting with Slim, Andersen tells him to clear out.

While Andersen is training the boys to break horses and getting cattle ready for the drive at the ranch, a group of men led by "Long Hair" Asa Watts (Dern) shows up asking for work. Andersen would like to hire these more experienced and seasoned men, but feels uneasy about them, and then when he catches Watts in a lie about who he has worked for in the past, Watts comes clean that they are fresh out of prison and can't get a job. With his suspicions confirmed, he tells Watts that he won't use him and will stick with the boys. Jebediah "Jeb" Nightlinger (Lee Browne), a Moorish Black camp cook arrives with a , making Anderson's trail crew complete.

With Nightlinger's arrival the training has to continue while out on the trail to Belle Fourche. Under Andersen's tutelage the boys learn to rope and brand livestock and on the trail, how to herd the cattle and horses. But nobody is aware that the gang of cattle rustlers led by Watts, who want easy money like the men looking for gold, but don't want to work that hard to get it, are shadowing them.

This survival story of learning and maturation through hardship, hard work and discipline, propounds the values of truth, loyalty, and fighting for what you believe in.

The Nightlinger character teaches the boys diversity and respect in their initial exchange after Jeb enters the bunkhouse. In the comical tension-relieving scene, Fats says, "Well sir, you're the first we've ever saw ["sic"] .", After some prodding, Jeb confirms that he's black everywhere, "Except for the whites of my eyes." The oldest boy, Slim, then proclaims, "See he's the same as us, except for that color." Jeb laughs-off being "just like you" with a fantastic Moorish tale of seduction, mayhem and heroism that thrills the boys, who ask if it is true. Jeb only says, "If it isn't, it ought to be."

Anderson and Nightlinger are both Civil War veterans. On the trail, the ramrod Anderson, accepts council from the outspoken Nightlinger on perhaps being too rough on the boys. The world-weary Jeb diplomatically manages an encounter with Kate () and her traveling .

Around the evening campfire, Slim picks out a Vivaldi tune (Largo from the ) on his guitar in stark contrast to when the boys later are caught raucously singing "" while getting drunk on stolen liquor.

After accidentally coming across the rustler gang, Long Hair threatens to slit Dan's throat if he reveals their presence. Out of mortal fear Dan betrays the trust of the group by remaining silent (until after it is too late). The reality of death is confirmed that very night when Dan is responsible for Charlie's death.

The film is known for depicting Wayne's cold-blooded killing after being shot in the back by Dern's character. This resulted in co-star Dern becoming typecast as a villain, which made it difficult for him to get worthwhile subsequent roles. During filming of this scene, Wayne warned Dern, "America will hate you for this." Dern wryly replied, "Yeah, but they'll love me in Berkeley." [Kirkwood, R. Cort. - [http://socialissues.wiseto.com/Articles/164255792/?print "John Wayne: Mr. America"] . - "The New American". - American Opinion Publishing. - May 28 2007]

Another well-known scene was that of a using . " Bob" was unable to alert them to danger. After Wayne chews the child out, the boy mutters, "Son of a bitch.", only to have Wayne coax him to say it repeatedly. The boy angrily builds longer curses until the boy is no longer stuttering, with, "You God damned mean, dirty son of a bitch!". To which Wayne finally responds, "I wouldn't make it a habit calling me that, son.".

Fatherhood, and more specifically, the father-son relationship is a recurring theme. Andersen has lost two of his own sons. He becomes a surrogate father to his "cowboys" during their cattle drive and eventually risks his own life to save them from a deranged killer. This father-son dynamic takes on a Christian metaphor at the end when his cowboys, baptized by violence in their quest to avenge his death, return to the scene of Andersen's murder with a tombstone and are mysteriously unable to locate his body. The tombstone inscription reads: "Wil Andersen: Beloved Husband and Father".

During the scene when "Long Hair" Asa Watts (Dern) shows up asking for work he says that he worked for "every big outfit in North Montana", including Dillard Fant at the Santa Rosa. Wil Andersen (Wayne) says that he was a pall bearer at Fant's funeral five years before, about 1870. Dillard Rucker Fant, owner of the 225,000 acre Santa Rosa Ranch in , died in 1908. [ [http://www.tshaonline.org/handbook/online/articles/FF/ffa3_print.html Dillard Rucker Fant] . - . - Texas State Historical Association. - Retrieved 2008-07-24]

In , Warner Bros. developed a for ABC starring Jim Davis, Diana Douglas, and . (best known for and ), produced the series. Only A Martinez, Robert Carradine, Sean Kelly and Clay O'Brien were in both the movie and the television series. At the last moment, ABC decided to reduce the show's format from one to one-half hour, a change which made it difficult to tell stories effectively considering the show's large cast. This arguably explained the show's unimpressive ratings and subsequent early cancellation.