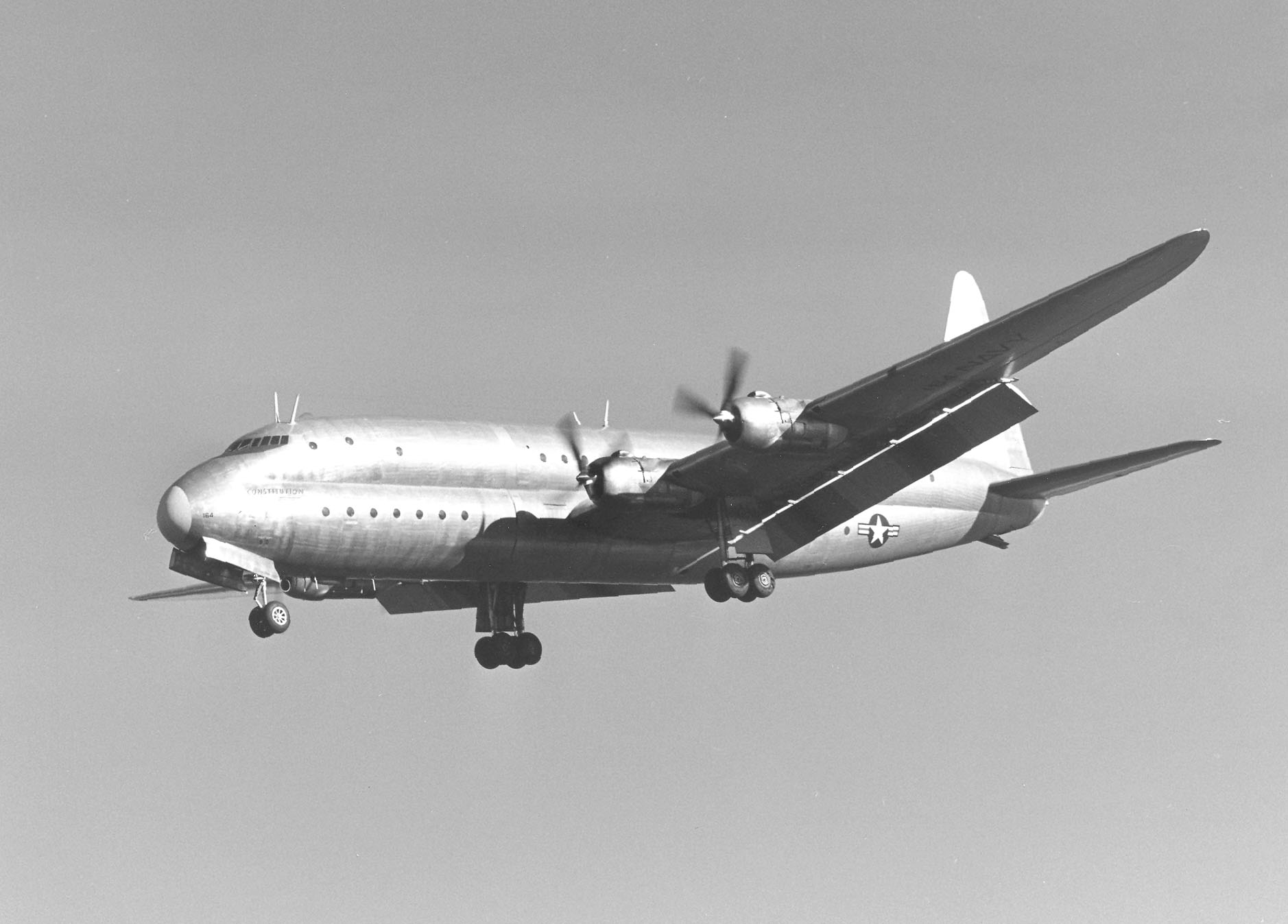 The Lockheed R6V Constitution was a large, propeller-driven, double-decker transport aircraft developed in the 1940s by as a long-range, high capacity transport and for the and . (The Constitutions were identified as R6O until 1950.) Only two of the planes were ever built, both prototypes. Although these two planes went into service with the Navy, the Constitution design ultimately proved underpowered and too large for practical airline use at the time. The Constitution remains the largest type ever operated by the U.S. Navy.

The Lockheed Constitution began life in 1942 as a joint study by the U.S. Navy, PanAm, and Lockheed. The design requirements, initially designated Lockheed Model 89, called for a large transport aircraft to improve upon the Navy's fleet of s. PanAm was involved in the study because such an aircraft had potential use as a commercial airliner. This transport would carry 17,500 pounds of cargo convert|5000|mi|km at a cruising altitude of convert|25000|ft|m and a speed greater than convert|250|mi/h|km/h|abbr=on. The aircraft would be fully pressurized and large enough so that most major components could be accessed and possibly repaired in flight. For instance, tunnels led through the thick wings to all four engines.)

The aircraft was designed by a team of engineers led by and W.A. Pulver of Lockheed and Commander E. L. Simpson, Jr. of the Navy. The name Constitution was given to the project by Lockheed president .ref|Boyne

The Constitution design had a "double bubble" fuselage, the cross section of which was a "figure eight". This unorthodox design utilized the structural advantages of a cylinder for , without the wasted space that would result from a single large cylinder of the same volume.

The first Constitution, BuNo 85163, was built in the summer of 1946 at the Lockheed plant in . Because of the aircraft's large size—the tail towered convert|50|ft|m—Lockheed had to build a special hangar for final assembly. The $1,250,000 hangar, Lockheed-California's Building 309, measured convert|408|ft|m long, convert|302|ft|m wide, and the equivalent of six stories tall. The footprint of the hangar covered four acres.

The R6O made its first flight on , . Joe Towle and flew the plane on a leisurely course to . Once there, the plane underwent a carefully documented test program. At this time, electronic data recording technology was not well developed, so instrument readings were recorded by a movie camera pointed at the instrument panel.

The first Constitution made a nonstop flight from to on , , (2,460 mi.). The pilot for the flight was Commander William Collins (USN) and the copilot was Roy Wimmer, Lockheed engineering test pilot. Four days later, the ship was formally christened by Mrs. John L. Sullivan, wife of the , at .

The R6O tested takeoffs with six rockets mounted on the rear of the fuselage. At full gross weight, the rockets shortened the takeoff run by 24%.

The second Constitution, BuNo 85164, first flew on , . This aircraft, like its predecessor, had a double-deck configuration. The second aircraft, however, had an upper deck fully furnished as a luxury passenger transport, with accommodations for 92 passengers and 12 crew. (Accommodations on the upper deck of the first Constitution were decidedly more spartan.) The upholstery on the upper deck was light gray with Navy blue trim. On the back of the forward bulkhead, in front of the spiral staircase leading to the lower deck, a permanent display case was occupied by a scale model of the original USS "Constitution sailing ship.

The lower deck had convert|7373|cuft|m3 of cargo space, and it was loaded by an electrical hoist. The lower deck could also be converted to seat an additional 76 passengers.

The second Constitution, like its predecessor, also made a nonstop transcontinental flight. On , , the aircraft flew its 16 crew and 74 members of the press from Moffett Field to . At the time, this was the largest number of people flown across the United States in a single flight. This flight inaugurated six months of regular service between Washington, D.C. and .

In the early 1950s, Ship No. 2 made a Navy recruiting tour of 19 cities. The side of the fuselage proudly advertised "YOUR NAVY—AIR AND SEA." Some 546,000 toured the plane's interior.ref|yenne

The Constitution had operational difficulties which prevented it from meeting its original design objectives. The four s did not offer the power needed by such a large aircraft. The engine also had cooling problems, which was corrected by flying with engine cooling gills partially open. This added drag and decreased overall range.

The Navy operated the two Constitution prototypes through the end of the 1940s and into the 1950s. By 1949, however, the Navy announced that it could no longer afford to operate these planes, and offered them to airlines on a five-year lease. No airlines expressed interest in using the Constitutions, so the Navy retired both aircraft in 1953. They went into storage at in 1955. Both aircraft and 13 spare engines were sold for $97,785.

* shows how the aircraft was deignated R6'Oh', not 'R sixty'.