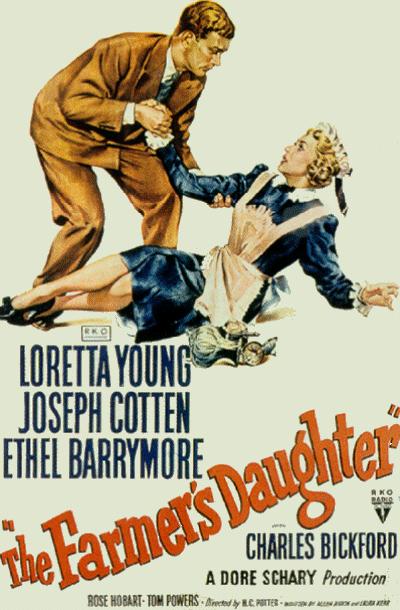 "The Farmer's Daughter" is a movie that tells the story of a farmgirl who ends up working as a maid for a Congressman and his politically-powerful mother. It stars , , , , , , and .

The movie was adapted by and from the play "Juurakon Hulda" by (using the pen name Juhani Tervapää). It was directed by .

It won the () and was nominated for Best Actor in a Supporting Role ().

In , a television series based on the film was produced, starring , and .

Katie Holstrom (Loretta Young), a Swedish-American, leaves the family farm to go to nursing school in Capitol City. Barn painter Adolph Petree (), who had completed a job for Katie's father, offers her a ride, but robs her of her money. Katie, refusing to ask her family for help, goes to work as a maid in the home of political power broker Agatha Morley () and her son, U.S. Representative Glenn Morley (). Soon, she impresses Agatha and her loyal Joseph Clancey () with her refreshing, down-to-earth common sense and Glenn with her other charms.

Unexpected problems arise when the Morleys and the other leaders of their political party select a replacement for a deceased congressman; they pick the unscrupulous Anders J. Finley (). Knowing of the man, Katie strongly disapproves of their choice. She attends a public meeting arranged to introduce Finley and begins asking pointed, embarrassing questions. The leaders of the opposition party are impressed and offer her their backing in the coming election. When she accepts, Katie reluctantly has to quit her job, much to Glenn's annoyance.

When Katie's campaign picks up support (with the help of some coaching from Glenn), Finley resorts to smearing her reputation. He pays Petree to claim Katie spent the night with him when he gave her a ride. As a result, Katie becomes so distraught, she runs home. Glenn learns of the chicanery, follows her and proposes to her.

After hearing the news of her son's engagement, Agatha, with her butler's help, gets Finley drunk and tricks him not only into revealing that he bribed Petree, and that he has him safely hidden away at his isolated lodge, but also that he has -like beliefs. With the help of Katie's three big, strong brothers (, , ), Glenn takes Petree away from the goons Finley assigned to watch him, and makes him confess over the radio. Agatha withdraws her party's support from Finley and endorses Katie, ensuring her election. In the final scene, Glenn carries Katie across the threshold of the .