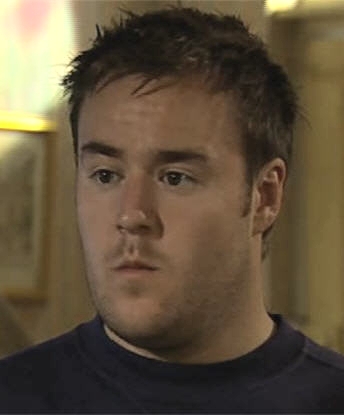 Tyrone first appeared in 1998 when his mother, Jackie, came to stay with , who had been her cellmate in prison. Tyrone was illiterate and had been in minor trouble with the police.

Tyrone was first employed as a supermarket trolley collector by and given a place to stay, until he accidentally pushed a trolley into the area manager's new car. He trained as an at Kevin's garage, after being found sleeping rough there after his mother had abandoned him.
Tyrone moved into Jack and 's bed and breakfast establishment, and adopted a greyhound, Monica, which had strayed into the garage. Jack and Vera virtually adopted Tyrone, who has turned out to be more loyal than their own son, Terry.

Tyrone became engaged to Maria Sutherland, the daughter of a dog breeder whom he met when trying to find a partner for Monica. came between Maria and Tyrone. Although they eventually resumed their relationship and even became engaged, they eventually split up after Tyrone decided that, despite his love for Maria, they were simply not well suited to being together. Tyrone is now in a serious relationship with kennel maid . They initially planned to move out of Number 9, but when Jack and Vera decided to move to Blackpool, they decided to buy it. When Vera Duckworth died suddenly of heart failure in January 2008, Tyrone was devastated. Jack continued to live at Number 9, and the family atmosphere was soon enhanced with the arrival of Molly's aunt, . Molly and Tyrone began to be speculated on as "the new Jack and Vera", although Vicky Binns and Alan Halsall said they could never fill those shoes. [ [http://www.corrieblog.tv/2008/07/alan_halsall_wi.html Corrieblog: Alan Halsall will fill his own shoes, thank you ] ]

Jack and Auntie Pam encouraged Tyrone to propose to Molly -- Jack even gave him Vera's engagement ring. Tyrone booked a table at a fancy restaurant, but was upstaged by a much flashier proposal before he could pop the question. A few days later, Pam suggested Tyrone put a ring in a decorative egg which also had a voice recorder. When Tyrone opened the egg at Rover's, instead of a recording asking Molly to marry him, the voice was Kirk asking how it worked. Tyrone ran out in shame. Jack and Kirk followed, and Jack told him the moments that didn't go as planned were often happier than the moments which did. Tyrone decided to try again, and returned to find a burger van decorated in Christmas lights and with a table in front. When Tyrone opened the egg to propose, Molly opened an egg of her own, with a recording of her saying, "Of course, you great nana."

The following month, Tyrone decided to visit his mum Jackie and let her meet Molly. Everything went fine until they found out Jackie was still £1,000 in debt and owed his dad's friend money. Tyrone decided to help, as Jackie had no money to spare, much to Molly's despair as the money was their wedding savings. Tyrone subsequently told Jackie that she wasn't invited to the wedding.

In September 2008, back at the garage, Tyrone's job was in jeopardy with 's attempts to sabotage Kevin's business. As a result of this Tyrone decided to earn some extra cash by volunteering to test out products for a medical research company. Kevin then asked him to buy half the business, Tyrone later agreed and they are now co-owners. So the garage can stay open for business.