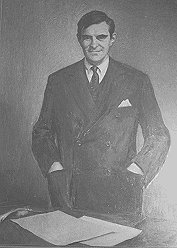 John Gilbert Winant (, &ndash;, ) was an American teacher and Republican politician from . Born in , Winant held positions in , national, and international politics. He was the first man to serve more than a single two-year term as , winning election three times.

Winant returned to his position at St. Paul's in 1919 after his military service, and was elected to the in 1920. He lost money in oil stocks in 1929, which he had profited from through the 1920s. After his terms as Governor, President appointed Winant to be the first head of the in 1935, a position he held until 1937. The next year, he was elected to head the in , , from January 1939. In 1941 Roosevelt appointed him to Britain, and remained in that post until he resigned in March 1946.

President appointed him U.S. representative to in 1946, although he retired to Concord shortly after to write his memoirs.

In 1947, Winant was only the second American citizen, after General , to be made an honorary member of the British . He committed suicide later that year and was buried at St. Paul's School.

An album of radio outtakes, " Presents Radio's Uncensored Bloopers" ( 80188), features a bizarre news report on Winant's suicide. The announcer quotes Winant's physician as saying Winant "committed suicide by shooting himself in the head with a large sixty-cent-size package of ." (It is unknown whether the report or the recording of it are genuine, as many records contain bits that were re-created after the fact.)