Stop and Smell the Roses

Stop and Smell the Roses 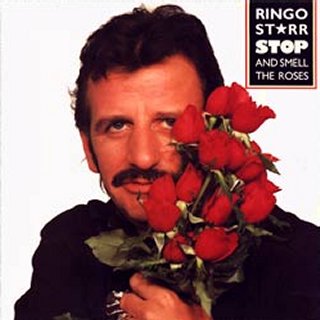 "Stop and Smell the Roses" is an album by , released in 1981 following the twin commercial disasters of "" (1977) and "Bad Boy" (1978). Wisely, Starr had taken time off to re-think his musical career and realized his best option was to return to his formula of having some musical assistance from his friends.

After meeting soon-to-be second wife on the film set of "Caveman" in early 1980, Starr contacted to initiate some sessions. With Wings currently in limbo and "" just released, McCartney booked time with Starr from 11- in to record three songs: "Private Property" and "Attention" (both McCartney originals) plus a cover of "Sure To Fall".

Next, got involved, writing "You've Got A Nice Way" for Starr and producing its recording that August. of was keen to help out and brought along "Dead Giveaway" that September, which they both co-produced. Long-time friend was next on Starr's checklist, presenting him with "Drumming Is My Madness" and the album's title track, both of which were recorded in early November, with early December sessions completing the work of the cork.

After working with McCartney, it was only natural that Starr would extend the invitation to his two other band mates in . When Starr arrived at 's estate on (where he was currently re-recording parts of "" after some of its songs had been rejected), Harrison presented him with "Wrack My Brain" - especially composed for Starr. "You Belong To Me", another cover from the past, was also recorded, with Harrison producing. Starr also recorded a version of "All Those Years Ago" but Ringo told George the vocal was too high for his range and he didn't like the words. (George took the track back, changed some of the lyrics and later with overdubs by Paul and Linda McCartney came out as a tribute to John Lennon and was the lead hit single of Harrison's "Somewhere In England" album.) Lennon was the last of The Beatles that Starr had yet to visit and - fresh from his musical re-awakening, having just released "" - Lennon was eager to meet with Starr. On , in , Lennon handed Starr the demos for "Nobody Told Me" and "Life Begins At 40", which Starr was keen to record. With Lennon producing, they set a date to cut the songs. On , however, everything changed, when Lennon was gunned down outside by crazed fan .

Devastated by Lennon's murder, Starr did not have the heart to record Lennon's songs (which would later be released on posthumous Lennon albums). After a period of mourning, Starr returned to the studio for the required overdubs and completed the album in February 1981. Initially titled "You Can't Fight Lightning" and with an alternate cover shot, in the US rejected the album, leaving Starr to find a new label. Fortunately, (and a subsidiary called in the US) was interested. With a re-sequenced running order and design change, the album was rechristened"Stop And Smell the Roses" after Nilsson's donated song.

Harrison's "Wrack My Brain" was the first single that November. While it missed the UK charts, it managed to give Starr his final US Top 40 hit, reaching #38. "Stop And Smell the Roses" was considered to be Starr's best album since 1974's "", but it was not enough to make it a hit, reaching no further than #98 in the US, even though it was his biggest-selling album in years. In early 1982, McCartney's "Private Property" was released as the second single but failed to chart anywhere. Nonplussed, RCA dropped Starr in 1982. For the first time in his career, Ringo Starr was out of a recording contract - and this time, no major UK or US company would be willing to sign him.

"Stop And Smell the Roses" was reissued on CD in the US by in 1994 with several bonus tracks from the sessions, but deleted some years later.