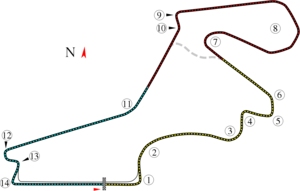 The 2005 Turkish Grand Prix was a race held on at the Istanbul Racing Circuit in , . This was the first race to take place in Turkey.

* Williams- cars retired from the race due to right-rear tyre failures - twice for each car.
* and collided on Lap 14. Schumacher's rear suspension was damaged, but he later rejoined the race after repairs to improve his qualifying slot by three positions at the next race. Webber's Williams lost the nose cone.
* was comfortably heading for second place on the penultimate lap when he overbraked after overtaking the lapped Jordan of , whom he had contact with, thus damaging the diffuser. On the next lap Montoya lost rear grip and ran straight ahead on Turn 8, losing second place to .
* lost his front wing and bargeboard in a first corner collision with . After the replacements he managed to continue racing till lap 29 where his engine failed.
* Juan Pablo Montoya's fastest lap was over 2 seconds faster than his team mate's qualifying time, usually fastest race laps are far slower than qualifying lap times.