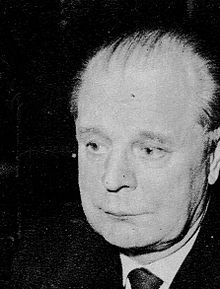 Onni Alfred Hiltunen (26 November 1895 – 8 June 1971) was a Finnish politician, minister in several cabinets and chairman of the Social Democratic Party [1].

Hiltunen was born in Jyväskylä. He worked as railwayman and was later a shopkeeper. He worked at a social democratic paper in Varkaus 1931-1946. Hiltunen was elected to the parliament for terms between 1930 and 1962 first from Northern and later from Southern Savonia electoral district.