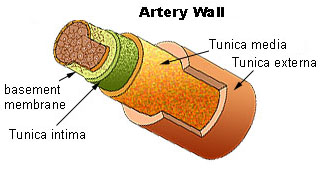 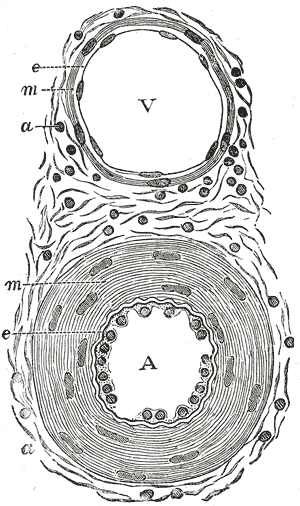 Caption2 = Transverse section through a small and of the of the of a child. (Tunica intima is at 'e')
System =
MeshName = Tunica+Intima
MeshNumber = A07.231.330.800
The tunica intima (or just intima) is the innermost layer of an or . It is made up of one layer of s and is supported by an internal elastic lamina. The endothelial cells are in direct contact with the .

The inner coat (tunica intima) can be separated from the middle () by a little , or it may be stripped off in small pieces; but, on account of its friability, it cannot be separated as a complete membrane. It is a fine, transparent, colorless structure which is highly elastic, and, after death, is commonly corrugated into longitudinal wrinkles.

The inner coat consists of: :# A layer of pavement , the cells of which are polygonal, oval, or fusiform, and have very distinct round or oval nuclei. This endothelium is brought into view most distinctly by staining with . :# A subendothelial layer, consisting of delicate connective tissue with branched cells lying in the interspaces of the tissue; in arteries of less than 2 mm. in diameter the subendothelial layer consists of a single stratum of stellate cells, and the is only largely developed in vessels of a considerable size. :# An elastic or fenestrated layer, which consists of a membrane containing a net-work of elastic fibers, having principally a longitudinal direction, and in which, under the , small elongated apertures or perforations may be seen, giving it a fenestrated appearance. It was therefore called by Henle the fenestrated membrane. This membrane forms the chief thickness of the inner coat, and can be separated into several layers, some of which present the appearance of a network of longitudinal elastic fibers, and others a more membranous character, marked by pale lines having a longitudinal direction. In minute arteries the fenestrated membrane is a very thin layer; but in the larger arteries, and especially in the , it has a very considerable thickness.