Money Hungry is a reality TV weight loss competition show based around the concept of bet dieting, with twelve teams of two competing for a $100,000 prize made up from team contributions.[2] 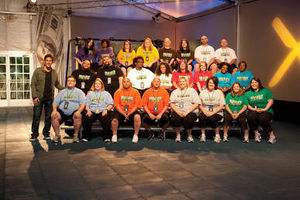 Episode 1 - "Put Your Money Where Your Mouth Is"

Our first introduction to the teams, the show opens with the contestants being forced off the cushy bus and made to hike up the hill to the house.

Scheming begins, and a school-boy crush Josh has on Jamie threatens his alliances.

Episode 3 - "Welcome to the Family"

After half the house (Slimpossible, Nuts, Chicago, Grading and Rocker Moms) bands together as "The Orphanage", the other half counters and becomes "The Family".

Tempers flare and things get heated when the Regulators and Mission Slimpossible get physical.

First aired August 30, 2010 No house vote this week leads everyone to butter up to the Big Heavies, who turn the tables by saving no one, and Josh turns his affections toward Stephanie.

The teams are thrown a curve when the week's challenge is not only physical, but mental as well.

The joy of being at the Rose Bowl stadium is diminished by the challenge: running up and down the stairs, transporting 100 footballs. Alliances shift as teams claim deals were made earlier.

Another puzzle throws off some of the teams. Phillip plays both sides to try and save his team from elimination.

One team attempts to vote themselves into the bottom in order to eliminate another.

Episode 10 - "The Ultimate Weigh-In" and Finale

In the final challenge, Tricia suffers an injury that puts Grading Curves out of the running. In a surprise gesture of team solidarity, Mission Slimpossible (after getting it back along with the Regulators) give their entry fee to Grading Curves.

Families gather as the last two teams weigh in and the winner is decided.