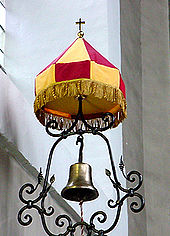 Minor basilica (Latin: Basilica minor, Basilicae minores in plural) is a title given to some Roman Catholic churches. By canon law no Catholic church can be honoured with the title of basilica unless by apostolic grant or from immemorial custom.[1]

In relation to churches, writers on architecture use the term "basilica" to describe a church built in a particular style. The early Christian purpose-built cathedral basilica of the bishop was in this style, constructed on the model of the semi-public secular basilicas, and its growth in size and importance signalled the gradual transfer of civic power into episcopal hands, which was under way in the 5th century.

Privileges previously attached to the status of basilica included a certain precedence before other churches, the right of the conopaeum (a baldachin resembling an umbrella; also called umbraculum, ombrellino, papilio, sinicchio, etc.) and the bell (tintinnabulum), which were carried side by side in procession at the head of the clergy on state occasions, and the wearing of a cappa magna by the canons or secular members of the collegiate chapter when assisting at the Divine Office. In the case of major basilicas these umbraculae were made of cloth of gold and red velvet, while those of minor basilicas were of yellow and red silk—the colours traditionally associated with both the Papal See and the city of Rome.[2]

These external signs, except that of the cappa magna, are sometimes still seen in basilicas, but the latest regulations of the Holy See on the matter, issued in 1989, make no mention of them. The status of being a basilica now confers only two material privileges: the right to include the papal symbol of the crossed keys on a basilica's banners, furnishings and seal, and the right of the rector of the basilica to wear a distinctive mozzetta over his surplice. The other privileges now granted concern the liturgy of the celebration of the concession of the title of basilica, and the granting of a plenary indulgence on certain days to those who pray in the basilica.[3]

The document imposes on basilicas the obligation to celebrate the liturgy with special care, and requires that a church for which a grant of the title is requested should have been liturgically dedicated to God and be outstanding as a center of active and pastoral liturgy, setting an example for others. It should be sufficiently large and with an ample sanctuary. It should be renowned for history, relics or sacred images, and should be served by a sufficient number of priests and other ministers and by an adequate choir.[3]

A list of the 4 major basilicas and the 1584 (as of the end of 2008) minor basilicas in the world is given on the GigaCatholic Information site, which has been described as "a non-profit website aimed at providing comprehensive and useful information about the Universal Catholic Church".[5][6]

In Torre del Greco is the Pontifical Basilica of the Holy Cross, called by that name not only on its own site, which recalls the visits to it of Pope Pius IX in 1849 and Pope John Paul II in 1990, but also in the list of the world's minor basilicas,[10] which, however, calls it simply a minor basilica.

Another such Italian church, recognized as a minor basilica, but not as a pontifical minor basilica, is the Pontificia Reale Basilica di S. Giacomo degli Spagnoli in Naples.[11]. This name, qualifying it as both pontifical and royal, is confirmed by several other sources.[12][13][14][15]

One pontifical basilica in Spain listed not as a pontifical minor basilica, but simply as a minor basilica,[16] is the Pontifical Basilica of St. Michael, Madrid, the ownership of which is since 1892 vested in the Apostolic Nunciature to the Kingdom of Spain. 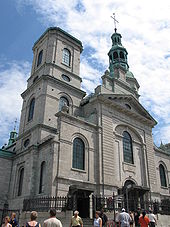 The minor basilicas form the vast majority, including some cathedrals, many technically parish churches, some shrines, and some abbey or convent churches. Some oratories and semi-private places of worship, have been raised to the status of a minor basilica, such as Saint Joseph's Oratory in Montreal.

Notre-Dame de Québec Cathedral in Quebec City was the first basilica in North America, so designated by Pope Pius IX in 1874. The Basilica of Saint Mary in Minneapolis became the first Basilica in the United States, designated in 1926, by Pope Pius XI. In Colombia, the Las Lajas Cathedral has been a minor basilica since 1954. In Africa, the Basilica of Our Lady of Peace of Yamoussoukro, in Cote d'Ivoire is reported to be slightly larger than St Peter's Basilica.[19]

The Basilica of Our Lady of Guadalupe, in Mexico City, is considered the second most important sanctuary of Roman Catholicism, second to the Vatican City on the basis of the number of pilgrims it hosts each year (between 12 and 20 million).[20] The Sanctuary of Lourdes in France, with several basilicas, receives between 5 and 6 million pilgrims each year.

There was a pronounced tendency in the 20th century to increase the number of churches that were granted the title of minor basilica. Examples among the many are the church containing Francisco Franco's tomb and those of many others in the monumental Valley of the Fallen near Madrid, the Mission San Carlos Borromeo de Carmelo, in Carmel, California, Manila Cathedral (also known as the Minor Basilica of the Immaculate Conception in Intramuros or the original Spanish settlement of Manila), and the Mission Basilica San Juan Capistrano. Towards the end of the century, stricter rules were applied and it was decided, for instance, that since cathedrals outrank basilicas in any case, the title of minor basilica would no longer be granted to them.[3]

Africa and the Middle East