Joséphine of Lorraine (Marie Joséphine Thérèse; 26 August 1753 – 8 February 1797) was a French princess of the House of Lorraine and by marriage the Princess of Carignan. She was the paternal grandmother of Charles Albert of Sardinia, from whom the present House of Savoy descends. 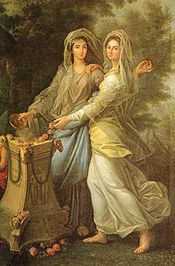 Joséphine with her sister Charlotte, c. 1770

On 18 October 1768 she married Prince Victor Amadeus of Savoy, the son and heir of Louis Victor, Prince of Carignan and his German wife Christine of Hesse-Rotenburg. Amadeus was also the brother of the recently married[2] princesse de Lamballe.

The couple had their only child almost exactly two years later. Prince Charles Emmanuel of Savoy was born in Turin on 24 October 1770. Joséphine was the only one of her siblings to have a child.

She died aged 43 in Turin at the Palazzo Carignano, the Turin residence of the Princes of Carignan. She was buried at Turin Cathedral until 1816, when she was moved to the Royal Basilica of Superga during the reign of Victor Emmanuel I of Sardinia.