The Mahabaleshwar Temple, Gokarna is a Hindu temple located in Gokarna, a Hindu religious pilgrimage centre in Uttara Kannada district in the Indian state of Karnataka. A Pranalinga (Pranalinga is defined as “the reality of God which can be apprehended by the mind.”[1]) also known as Atmalinga or Shiva Linga is deified in the temple, which is facing the city beach of the Arabian Sea in Gokarna. The Shiva Linga has a hoary legend. It is said to bestow immense blessings to devotees who even glimpse it.[2][3] The temple is considered as pious as the Shiva temple at Varanasi or Kashi in North India on the banks of the Ganges River and hence is known as the Dakshin Kasi (South Kasi).[2][3]

According to the legend, the Atmalinga was perforce placed at Gokarna, in the temple precincts where it is presently deified, by Ravana, the demon King of Lanka of epic Ramayana fame when he carried it from Mount Kailash in the Himalayas. Pilgrims take a holy dip in the Arabian Sea before visiting the temple for worship.[2][3][4] It is one of the seven sacred Muktikshetras or Mukthistala (place of salvation) in India where many Hindus of Karnataka perform obsequies (death rites) for their departed; six other Muktistalas in Karnataka are: Udupi, Kollur, Subrahmanya, Kumbasi, Kodeshvara and Sankaranarayana.[5][6]

The temple is located on the shores of the Karwar coast of the Arabian Sea in a green environment in the holy town of Gokarna, also spelt Gokarn, on the West Coast of India in Uttara Kannada or North Kannada district. Gokarna lies between the Gangavali and Aganashini rivers.[3][7]

The hoary legend of the temple as narrated links Ravana of Ramayana fame, the demon king of Lanka, not only to the Shiva Linga deified in the Mahabaleshwar Temple but also to the Bhadra Kali temple here. The legend also provides the reasoning for the naming of the Gokarna town.[4]

Ravana's mother, a staunch devotee of Lord Shiva, was worshipping a Shiva Linga to bring prosperity to her son. Indra, the Lord of Heaven, who was jealous of this worship, stole the Shiva Linga and threw it away into the Sea. The distraught mother of Ravana went on a hunger strike as her devotional worship of Shiva was disrupted. Ravana then promised his mother that he would go to Mount Kailash, the abode of Lord Shiva, and bring the main Atmalinga itself for her worship. Ravana then performed severe penance at Mount Kailash to please Lord Shiva and also sang, in his melodious voice, praises of Shiva (Shiva Tandava Stotram). He even chopped his own head, and made a harp with threads drawn from his skin and intestine. Shiva pleased with all this devotional worship agreed to bestow boons to Ravana. Ravana, pleased with the promise of Shiva, asked for the Atmalinga and also a wife for himself, as pretty as Uma (mother of creation), Shiva's wife. Shiva then took out the Atma Linga, brightly shining like the Sun, from his own heart and gave it to Ravana with strict instructions that it should not be placed on ground till it was deified at a final destination. As regards the second request for a beautiful wife, Shiva offered his own wife to Ravana, as in his view there was no other woman more beautiful than Uma, his wife.[8]

Ravana, blinded by his infatuation for Uma, accepted her and carried her off on his shoulder along with the Atmalinga. He went south towards his kingdom. This created an alarm and fear among the various gods in heaven. Ganesha, Skanda (warrior god) and Virabhadra, sons of Shiva and Parvati were perturbed. Nandi, the bull was equally surprised by this development. All of them appealed to Shiva for redress from this unwarranted situation. Shiva told them not worry and promised that Lord Vishnu would redeem the situation.[9][10]

Uma, who was ordered by Shiva to go with Ravana, then appealed to Lord Vishnu for help. Vishnu agreed and he met Ravana at Gokarna, disguised as an aged, frail looking Brahmin. The Brahmin asked Ravana as to how he was carrying such a lovely woman on his shoulders. Ravana, in his enthusiasm, explained that Shiva of Kailash himself had given her to him. Pleased with the Brahmin's words of praise, Ravana brought her down to have a look at her charming face. This was his undoing as at that moment, Vishnu played a trick and made Uma look haggard, aged and repulsive. The Brahmin then gave a derisive laugh and made a humiliating remark of Ravana's choice of the lady. Thus humiliated, Ravana deserted Uma and went back to Kailash to complain and plead with Shiva. Vishnu then asked Uma to settle down at Gokarna. Now, she is worshipped in Gokarna, as Mother Bhadrakali.[9]

Then Vishnu created an illusion of a charming girl in front of Ravana and assured him that this girl would be born as Mandodari, daughter of Mayasura and marry him. Mollified by this promise, Ravana returned carrying the Atmalinga. On the way, he met Ganesha in the garb of a cowherd (by the request of lord indra) at the same location where he had deserted Uma. At that moment Ravana wanted urgently to attend the call of nature and he, therefore, requested Ganesha to hold the Atmalinga in his hand till he returned after ablutions.[11] There is another version to the legend at this point. It is said that Ravana, being a Brahmin wanted to offer his evening religious prayers, Sandhyavandanam, and he, therefore, requested Ganesha, who appeared before him as a Brahmin boy, to hold on to the Atmalinga till he returned; with strict instructions to Ganesha not to place it on the ground under any circumstance.[6]

However, Ravana could not come within the specified time. Ganesha called out thrice rapidly for Ravana. Even before Ravana could return, Ganesha placed the Atmalinga on the ground, tricked Ravana and vanished from the scene with his cows. Ravana then chased the only cow, which was going underground. However, he managed to get hold of the cow's ear only, as the rest of cow's body had disappeared below ground. It is this ear now seen in a petrified form, which has given the name 'Gokarna' to the place, meaning "Cow's ear." (in Sanskrit 'Gow' means "cow" and 'karna' means "ear").[6][10][11] Then, Ravana tried hard to lift the Shiv Linga but failed as it was firmly fixed. Ravana had even fainted; thereafter he gave the name Mahabaleshwar (meaning all-powerful) to the Atmalinga.[10] Thus, according to the legend narrated, the place now boasts of three divine entities namely: Gokarna, the cow's ear; the Atmalinga or Shiva Linga that is deified in the Mahabaleshwar Temple; and the Goddess Bhadrakali, which are all now divine places of worship integral to Gokarna.[12]

The temple built in Dravidian architectural style, with granite stones, has the Atmalinga enshrined in it on a "square Saligrama Peetha" (pedestal). It has a small hole at its centre from where devotees can see the top of the Atmalinga. The deity, a carved stone image of Lord Shiva, is also deified here in a standing position and has two arms, and is said to be 1500 years old.[6][7][10]

Vijayanagara Emperor visited the temple and weighed himself in gold here. In 1665, Shivaji, after disbanding his army here, worshipped at the temple. In 1676, Fryer, the English traveller visited the place during Shivaratri festival and has written in detail about the festival at the temple.[13]

The religious practices observed by most devotees, who are accompanied by their priests, consists of first shaving their head, fasting and taking a bath in the Arabian Sea, opposite to the temple. Then, they pay obeisance to lord Ganesha (the elephant headed god) defied in the Shri Maha Ganapathi Temple, which is a few yards away from the Mahabaleshwar Temple. After observing all these religious procedures, devotees visit the main shrine of Mahabaleshwar for a darshan, with the fervent prayer that such a formal viewing of god would wash all their sins and usher prosperity in their lives.[14]

Shivaratri festival, observance of the birthday of Lord Shiva, is celebrated in the temple town in February, when a very large number of pilgrims visit the shrine. During this festival, Rathyatra (Rath is a large wooden chariot) is also held when images of Shiva and other deities are installed in the chariot and it is then ceremonially pulled through the town by devotees, accompanied by the drum bands. The Rathayatra starts from the Shri Maha Ganapati Temple at the terminus of the main market street, also known as the 'Car Street'.[5][7][14] 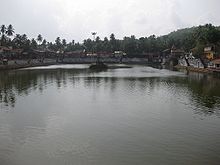 Kotitheertha or Pushkarani – a holy pond close to the Mahabaleshawar Temple

Apart from the Mahabaleshwar Temple there are several other attractions of religious significance in Gokarna that are linked to the local legend of the temple. These are:[6]

According to the legend Sri Maha Ganapathi Temple was built in honour of the boy Ganapathi, who deceived the demon Ravana and saved the Atmalinga that is now installed in the Mahabaleshwar Temple. The temple has a granite image of Ganesha deified in it which is 5 feet (1.5 m) tall and two-handed; at the top of its head there is hole that is stated to be a mark of a violent blow conjectured to have been inflicted by Ravana. The temple has its own identity and is also known as Sidda Ganapati.[15][16]

According to legends, the Atmalinga that vanished in the form of gov or cow made a lasting cave in the nearby hill called as "Gogarbha" meaning 'the woumb of cow'. The cave is still visited by sadhus and used as a resting place. The folklore said sadhus went into 'Gogarbha' and reached 'Kashi', the holy city of hinduism and final pilgrim place to visit.

The Temple of Bharat

Although one of a kind temple still exists on the hillock near the mahabaleshwar temple, its deity has been stolen by miscreants. Its uniqueness is that it is situated well above the temple of Rama with a ramateertha

Kotitheertha is a man-made pond, which is used for immersion of idols and ritual bathing. It is surrounded by temples and has a small platform in the centre.[17] Devotees usually take bath in the pond before they visit the Mahabaleshwar Temple for worship. The pond was cleaned recently.[18]