The Jersey Crew was allegedly being recognized as a criminal organization upon the foundation of the Commission in 1931, after the murders of the two most powerful mob bosses in New York City, Giuseppe "Joe the Boss" Masseria and Salvatore Maranzano. The crew were recognized as bootleggers under Gaetano "Tom" Reina in the early 1920s, as they worked throughout the Prohibition with smuggling of alcohol into New York City. After the meeting in Atlantic City in 1931, when Thomas Gagliano and Tommy Lucchese were chosen as bosses of the old Reina crime family, the New Jersey Crew came under the wings of the Bronx faction leaders.

Toward the 1940s and early 1950s, the New Jersey Crew expanded their operations through their legitimate businesses. The crew had since 1931 been under the control of Gaetano "Tommy" Lucchese, the Underboss of the Gagliano crime family, and the crew kept operating from Bergen County through Essex, Morris, Passaic and Union counties, all the way to Sussex County. Upon the death of longtime Boss Thomas Gagliano, Tommy Lucchese was soon installed as boss of the family, which was renamed the Lucchese crime family. The crew were then headed by several of their high-ranking members, like prominent New Jersey mobsters Settimo Accardi, Anthony "Ham" Delasco, and Joseph Abate from Newark. As the time of the Joseph Abate regime as leader was ending Anthony "Tumac" Accetturo, who was chosen to become the new leader to the crew. Accetturo had a good friendship with Lucchese caporegime Anthony "Tony Ducks" Corallo and was put in charge of the crews entire illegal gambling and loansharking operation in Newark, the crew had a new unofficial leader.

Toward the 1970s, the crew were unofficially headed by Anthony "Tumac" Accetturo, because Accetturo wasn't yet inducted into the Lucchese crime family, due to "closed books". The leader of the crew was still Joseph Abate, while Anthony Accetturo was his protégé waiting to take over the crew.[2] The Jersey Crew then came to control the entire Newark area, with loansharking, illegal gambling, narcotics, money laundering and extortion operations. Reportedly, with Accetturo in charge of the crew, they handed something between $70,000 and $80,000 a year to Tommy Lucchese. Upon Lucchese's death in 1967, and several years of different "acting bosses" as Carmine "Mr. Gribbs" Tramunti and Ettore "Eddie" Coco, until the year of 1973, when Anthony Corallo was released from prison, and quickly installed as boss. Corallo, a longtime friend of Accetturo, quickly inducted Accetturo and his second in commands Michael "Mad Dog" Taccetta and Martin Taccetta into the Lucchese crime family, so they could officially control the entire New Jersey area.

During the early 1970s, Accetturo relocated to Miami to avoid prosecution for his illegal gambling and loansharking business in Newark, and Michael Taccetta was soon promoted by Accetturo to run the day-to-day activities. Accetturo even created illegal operations in Florida where he could lie low from law enforcement. Taccetta soon expanded Accetturo's former operations in New Jersey, as the crew grew stronger, and several members of the Lucchese crime family in New York were sent to aid the moneymakers over the bridge, as Taccetta developed an operation that soon controlled the entire New Jersey area. From arson and burglary, to loansharking and extortion, to illegal gambling and drug trafficking, the Jersey Crew soon made millions of dollars in profit, and sent hundreds of thousands of dollars back to Anthony Corallo in New York City for years. Both Accetturo and Taccetta soon became the most powerful mobsters in New Jersey. Accetturo would then suffer from several indictments, following the State of New Jersey's try to extradite Accetturo, but failed due to his poor health. Accetturo later relocated his business interests to Miami and Hollywood, Florida, but still remained the official boss of New Jersey. Michael Taccetta was chosen once again to run the Northern New Jersey faction of the Lucchese crime family, during the mid 1970s. Toward the late 1970s, the crew allegedly earned something between $700,000 and $800,000 in profit every year.

In 1980, the longtime Don of the Philadelphia crime family, Angelo "Gentle Don" Bruno, was shot and killed on March 12, resulting in a huge power vacuum between prominent Bruno members Philip Testa and Nicodemo Scarfo, both fighting for the total control of the Bruno crime family. Accetturo and Taccetta, on the other hand, used their situation to establish a new foothold in Philadelphia, as a part of the Jersey Crew, with illegal gambling and loansharking operations. Unfortunately, because of the bad relations between the two factions in Philadelphia's crime family, as well as both Taccetta and Accetturo taking advantage of the situation, the relationship between Philadelphia and the New York Families, especially the Luccheses, eventually turned worse after the murder of Angelo Bruno, which led to all cooperation between the families being completely terminated. It was around this time that prominent Bruno member Giacomo "Jackie" DiNorscio, and many others, defected to the New Jersey faction of the Lucchese crime family to make more profit and to avoid being killed.

During the early 1980s, US law enforcement started an operation to determinate all organized crime activities in the North Jersey area, as a four-year-long investigation was finally announced, and indictments were brought up toward 20 members of the Jersey Crew.[3] Accetturo was brought from Florida, the Taccetta brothers were arrested in Newark, and 17 other known members were put on trial for 76 Racketeer Influenced and Corrupt Organizations Act (RICO) predicates, which included loansharking, extortion, racketeering, illegal gambling, money laundering, drug trafficking, arson and thefts, as well as murder and conspiracy to commit murder. In late 1986 and early 1987, the trial first began. During the trial, former member of the Philadelphia crime family Giacomo "Jackie" DiNorscio fired his lawyer and went on to represent himself during the entire trial. Although not popular with Accetturo and Taccetta, DiNorscio is reported to have charmed the jury, as the trial ended in 1988 with the acquittal of all 20 defendants. The prosecutors were stunned, as the Jersey Crew went right back where they left off.[3]

As the trial ended with all defendants acquitted in 1988, the authorities eventually managed to split up the Jersey Crew, as Michael Taccetta grew jealous on Anthony Accetturo, Jr., who was said to take over for Anthony Accetturo on his eventual retirement. The Taccetta brothers reportedly claimed war on Accetturo, who had escaped to Miami to avoid being killed. Although the war never got to a point of massive shooting in the streets, the two factions were close to killing and destroying each other completely in late 1988. But the crew had other problems, as the Lucchese crime family was given new leadership, when Vittorio "Vic" Amuso stepped up after Corallo.

Toward the year of 1989, the Jersey Crew's war position had eventually declined, as the two factions were more interested in making money than who was in charge. The new leaders were reportedly Michael Taccetta and Martin Taccetta, who operated through their legitimate business, Taccetta Group Enterprises, which was under control by the Lucchese crime family. Through the company, the Jersey Crew were able to launder money and pay their tribute to the heads of the Luccheses in New York, but as Anthony Corallo was sentenced to life imprisonment in 1987, and his protegé Anthony "Buddy" Luongo was found murdered earlier, the new bosses Victor Amuso and Anthony "Gaspipe" Casso, known for their brutal use of violence, questioned the profit they received from the Jersey Crew. Apparently, both Accetturo and Taccetta had skimmed off the profit and only sent a $50,000-a-year payment to the new leaders from the Brooklyn faction. When they demanded 50% of the crew's total profit, both Taccetta and Accetturo reportedly refused, portraying themselves as hard-working money machines that were only having a bad year. Amuso and Casso, on the other hand, saw this as an act of weakness, and gave the order to "Whack Jersey", meaning that the entire North Jersey faction should be eliminated. Summoned to a meeting in Brooklyn with Victor Amuso and Anthony Casso, the entire North Jersey faction, who were fearful of being massacred, went into hiding, disrupting their illegal activities. Over the next 12 months, most of the New Jersey crew members came back to the family. Amuso is to have portrayed Accetturo as a distrustful servant who was betraying his boss, as Taccetta reportedly is to have sent messages to Amuso in Brooklyn, asking for a contract to be placed on Accetturo's life, so Taccetta could control the entire New Jersey faction.

Upon the murder-contract Taccetta had put on his life, Accetturo had been placed under federal protection, as he was extradited from North Carolina to New Jersey. During this time, Accetturo had little power in the Jersey Crew, as Amuso had reportedly stripped his rank and demoted him to soldier. The Taccetta brothers also had problems, as their longtime rival Thomas Ricciardi was ready to step up and take control over the North Jersey faction of the Lucchese crime family in the early 1990s, but as everything looked to bring a new war to the streets, Accetturo, the Taccetta brothers and Ricciardi were put on trial for racketeering, loansharking, extortion, illegal gambling, drug trafficking, murder and conspiracy to commit murder. As the entire crew's administration was put on trial in 1992, Ricciardi decided to defect to the government and turn state's evidence in the beginning of the trial, and eventually testify against Martin and Michael Taccetta. Although Michael Taccetta was sentenced to life imprisonment in 1993, his brother Martin was acquitted on the murder charges and sentenced to 25 years in prison, as he can be paroled in 2016. Ricciardi went into the Witness Protection Program, and revealed that the Racketeer Influenced and Corrupt Organizations Act (RICO) case in 1988 ended the way it did because the jury had been rigged. 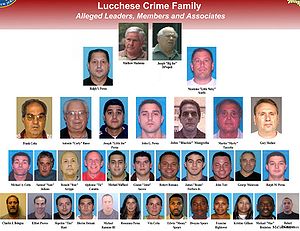 Although the Jersey Crew is much weakened due to increased law enforcement and internal rivalry, Michael Taccetta, at age 60, is reported as the official boss of the New Jersey faction of the Lucchese crime family, though he is serving a prison term without the possibility of parole. Upon his release, Martin Taccetta is reportedly ready to take over as the Boss of North Jersey. The crew is estimated to have between 20 to 30 made members, and twice as many associates. Still, after prosecution, the Jersey Crew remains a strong faction of the Lucchese crime family, operating with illegal activities mostly in Newark.

A leading capo in the faction is chosen as boss to supervise the other capos. However, this rank of boss carries little power in New York as the family leadership still views him as just a capo.[2]

The Jersey Faction have several sub-groups