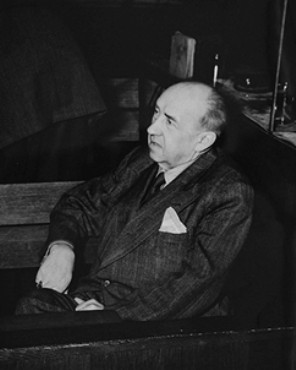 Funk was born into a merchant family in , , . He was the son of Wiesenbaumeister Walther Funk the elder and his wife Sophie (née Urbschat). He studied law, economics, and philosophy at the and the . In he joined the infantry but was discharged as unfit for service in 1916. In 1919 Funk married Luise Schmidt-Sieben. Following the war he worked as a journalist, and in 1922 he became the editor of the center-right financial newspaper the "Berliner Börsenzeitung".

Funk, was a nationalist and anti-, resigned from the newspaper in the summer of 1931 and joined the Nazi Party, becoming closer to who arranged his first meeting with . Partially due to his interest in economic policy, he was elected a "Reichstag" deputy in July 1932, and within the party, he was made chairman of the Committee on Economic Policy in December 1932; a post that he did not hold for long. After the Nazi Party came to power, he stepped down from his "Reichstag" position and was made Chief Press Officer of the .

*In March 1933, Funk was appointed as a State Secretary at the .
*In 1938, he assumed the title of Chief for Economics ("Wirtschaftsbeauftragter").
*He also became Minister of Economics in February of that year, replacing who had been dropped in November 1937. Schacht had been dismissed in a power struggle with "Reichsmarchall" , who was quick to tie the Ministry more closely to his Four Year Plan Office.
*In January 1939 Funk gained another credit to his name when he assumed the post of President of the "", again replacing Schacht.
*He was appointed to the Central Planning Board in September 1943.
*He was a wartime director of the Bank of International Settlements based in .

Despite poor health Funk was tried with other at the . Accused of conspiracy to commit crimes against peace; planning, initiating and waging wars of aggression; war-crimes and crimes against humanity, he argued that, despite his titles, he had very little power in the regime. Göring described Funk as "an insignificant subordinate," but documentary evidence and his wartime biography "Walther Funk, A Life for Economy" were used against him during the trial, leading to his conviction on counts 2, 3 and 4 of the indictment and his sentence of life imprisonment.

Funk was held at along with other senior Nazis. Released in 1957 due to ill health, he died three years later.