The Grass Mud Horse or Cao Ní Ma is a Chinese Internet meme widely used as a form of symbolic defiance of the widespread Internet censorship in China. It is a play on the Mandarin language words "fuck your mother", and one of the so-called 10 mythical creatures created in a hoax article on Baidu Baike in early 2009 whose names form obscene puns. It has become an Internet chat forum cult phenomenon in China through chat forums and has garnered world-wide press attention, with videos, cartoons and merchandise of the animal, which supposedly resembles the alpaca, having appeared.

Cao Ni Ma, literally "Grass Mud Horse", was supposedly a species of alpaca. The name is derived from a profanity (Chinese: 肏你妈/操你媽; pinyin: cào nǐ mā), which translates to "Fuck your mother"[1] (See also: "Motherfucker" and "Mother insult") Note that the comparison with the "animal" name is not an actual homophone, but rather the two terms have the same consonants and vowels with different tones, which are represented by different characters.[1]

According to the original article from Baidu Baike,[2] they originate from an area known as "Ma Le Ge Bi" (Chinese: 马勒戈壁, English: Mahler Gobi) (resembles 妈了个屄, meaning "your mother's fucking cunt"), and some variants of the animal are known as 沃草泥马 (wò cǎo ní mǎ, resembling 我肏你妈/我操你媽, meaning I fuck your mother), which can only eat fertile grass (沃草 in Chinese, resembling 我肏/我操, meaning "I fuck!" (translated to 'fuck me' in English profanity), while other variants are known as 狂草泥马 (kuáng cǎo ní mǎ, 狂 meaning "crazily", "violently" or "insanely"), which are dubbed as the "kings" of the Cao Ni Ma. The initial image found in the original Baidu Baike article was a zebra, but was turned into an alpaca in subsequent revisions. 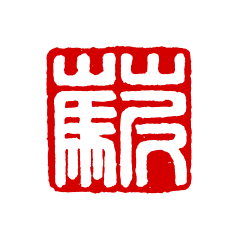 This is a Chinese seal carving work. The character is a combination of three characters, which is done by Chinese netizen. This is a satire of Chinese Internet Censorship.

The Grass Mud Horse is said to be the dominant species which lives within the Mahler Gobi Desert, and thus the alternate name for the region is called cǎo ní mǎ Gēbì (草泥马戈壁, "Grass Mud Horse Gobi Desert"). This is close in pronunciation to cào nǐ mā ge bī (肏你妈个屄/(操你媽個B, "fuck your mother's cunt"). The animal is characterised as "lively, intelligent and tenacious".[3] However, their existence is said to be threatened by the "river crabs" which are invading their habitat.[4]

The river crab (河蟹, héxiè) symbolises official censorship, as its pronunciation resembles the word for "harmony" (和谐, héxié), in reference to the "harmonious society" which the leadership professes to aspire to.[5] The term "crab" itself is rural slang, meaning "a bully who uses power through force", and the "River Crab" has become a symbol of crude censorship backed with the threat of force.[6] The river crab is often depicted wearing three wristwatches, since 戴錶 (dài biǎo, "wearing a watch") is homophonous with 代表 (dài biǎo, "represent"), referring to the Three Represents.

Music videos,[7][8] as well as "documentaries"[9] and cartoons about "Grass Mud Horse" started appearing on Youtube and elsewhere on the Internet.[10][11] One music video, whose musical arrangement of a children's choir has been likened to It's a Small World,[12] scored some 1.4 million hits; a cartoon attracted a quarter million more views; a nature documentary on its habits received 180,000 more hits.[5] Even though many of these videos have gotten past Chinese censorship, some have had their sound blocked, with a message saying "This video contains an audio track that has not been authorized by WMG."[13] 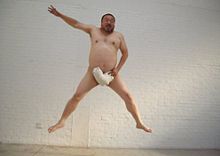 "草泥马挡中央": Ai Weiwei's self-portrait holding the stuffed animal has a double meaning. It can be interpreted as: "Fuck your mother, the Communist party central committee".[14]

Yazhou Zhoukan (亞洲周刊) reported that Zhan Bin, a teacher at the Beijing Institute of Fashion Technology,[6] also created a new Chinese character by fusioning the three Chinese character radicals for grass, mud, and horse. Although the word so far has no pronunciation. Official cleanup of the Internet which threatens the Caonima have already spurned other "Mud Horse" variants such as "滾泥马" and "幹泥马" with similar connotations.[15]

The "Grass Mud Horse" became widely known on the English-language web following the 11 March 2009 publication of a New York Times article on the phenomenon,[5] sparking widespread discussion on blogs. "Grass Mud Horse" themed merchandise, such as plush dolls are selling over the Internet.[16] One Guangzhou toy manufacturer reportedly produced its first batch of 150 Grass Mud Horse cuddly toys with official birth certificates issued by Mahler Gebi Mystical Creatures Bureau. The animals come in brown and white, named Mahle (马勒) and Gebi (歌碧) respectively, and sell for 40 yuan each. To accompany these, a user's and feeding manual have been created.[17] Whereas they were called 'Caonima' before the crackdown, Internet sellers now list them using the correct Chinese term '羊驼' (Alpaca).

In 2009, renowned artist Ai Weiwei published an image of himself nude with only a 'Caonima' hiding his genitals, with a caption 『草泥马挡中央』 – a defiant act which some political observers have suggest may have contributed to his arrest in 2011. Michael Sheridan of The Times suggested that Ai had offered himself to the authorities on a platter with this provocative art. Sheridan cited the caption's double meaning in Chinese: one interpretation was given as: "Fuck your mother, the Communist party central committee".[14]

The Beijing Television Cultural Center fire earned a number of photoshopped parodies, including one with an alpaca's outline in the smoke.

On 20 March 2009, the New York Times reported that a Chinese contributor to Global Voices Online posted a message from an Internet administrator to managers of online bulletin boards warning that "any content related with Grass-Mud Horse should not be promoted and hyped" because "the issue has been elevated to a political level ... The overseas media has exaggerated the incident as a confrontation between netizens and the government."[18][19]

In a press conference on 25 March, the Foreign Ministry confirmed that China's access to Youtube had been officially blocked since two days earlier. According to Reporters Without Borders, the block was an attempt to stem videos showing Chinese repression of the Tibetan population in the run-up to the 50th anniversary of the Tibetan uprising of 10 March 1959, and to block access to the popular Grass Mud Horse video posted in early March.[20]

The State Administration of Radio, Film, and Television issued a directive on 30 March 2009 to highlight 31 categories of content prohibited online, including violence, pornography, and content which may "incite ethnic discrimination or undermine social stability". Many netizens believe the instruction follows the official embarrassment over the rise of the "Grass Mud Horse" phenomenon. Industry observers believe that the move was designed to stop the spread of parodies or other comments on politically sensitive issues in the runup to the anniversary of the 4 June Tiananmen Square protests.[21] Following the government's directive, most Chinese essays and blog postings made about the Grass Mud Horse have been removed from the Internet after being discovered by government censors.[6]

The Caonima reappeared as a subject of online cartoon satire following the announcement of the Green Dam Youth Escort pornography blocking software project.[22]