At 8:27 p.m. on 9 February 2009, the entire building caught fire on the last day of the festivities marking the Chinese new year and was put out six hours later. A nearby unauthorised fireworks display caused the fire.[1]

The incident, and its coverage by Chinese state media, caused a furore in China. CCTV officials had authorised the powerful pyrotechnics, carried it out without the required permit from local government, and ignored repeated police warnings not to hold them. The authorities' attempts to limit damaging direct coverage of the blaze was criticised by citizens and the international press. 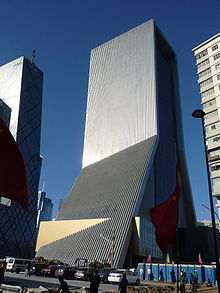 The TVCC building before the fire

Construction was started in 2004 and was expected to be completed in May 2009.[1][2] The building was to be named "Television Cultural Center", TVCC, with the Beijing Mandarin Oriental being its main tenant.

Its nicknames include the Termite's Nest or the Boot because of its radical design. The building, along with the CCTV Headquarters Building, was built using far less steel than conventional skyscrapers,[citation needed] and designed to withstand major earthquakes.[citation needed] The radical structure gives the towers their form.[3] In all, 140,000 tonnes of steel was used in its construction.[4]

The construction budget of the building is said to be near US$730 million.[5] The center would have included a television studio with seating for 1,500 audience members, recording studios, digital cinemas, news release facilities, and a 241 room five-star hotel to be operated by Mandarin Oriental.[3] The total height of the 44-floor building was 159m.[1][6] The innovative, wedge-shaped building was designed by the Dutch architect Rem Koolhaas and his firm Office for Metropolitan Architecture. The engineering firm for the building was Arup, East Asia,[7] who designed and built the TVCC after an extensive internal study of the World Trade Center building collapses on 11 September 2001.[8]

The cause has been linked to a massive Chinese New Year fireworks display in the compound, authorized by CCTV itself, without the permission or participation from Beijing police, the Beijing Fire Department, Beijing City government, or any other governmental department.[9][10] CCTV had ignored three consecutive police interventions and warnings and had four television cameras trained on the multi-million yuan fireworks, which consisted of nearly 700 high explosive pyrotechnic devices, reports said.[4]

Six hundred firefighters arrived on the scene to fight the blaze,[11] which lasted five hours and caused one death and seven injuries. Chinese media reported one firefighter – secretary of the fire department's communist party branch – died from smoke inhalation and seven people were injured, six of them firefighters.[1] The Chinese media proclaimed the dead firefighter a "revolutionary martyr"(革命烈士).[12] China Free Press estimated that the fire resulted in more than 4 billion yuan (US$588 million) in damages.[13]

Xinhua reported, and the municipal public security bureau confirmed, that Beijing police detained an official of CCTV. Xu Wei (徐威), in charge of the CCTV construction site, was taken to a police station in eastern Beijing's central business district, suspected of being the organiser of the fireworks display.[14] CCTV later made a public apology:[15] 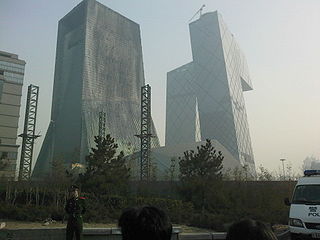 The TVCC building after the fire

The Beijing Municipal Fire Brigade confirmed that the cause of fire was the illegal use of highly explosive fireworks at the construction site. CCTV later apologized to the public for the inconvenience, mainly traffic re-direction, they caused.[15] The Fire Brigade said that the fire began on the building’s roof and spread to the lower floors, fed by high winds. Toxic fumes and a lack of working sprinklers were said to have hampered efforts to extinguish the fire.[17]

An amateur video that was uploaded on the Internet showed the fire starting after a shell from the fireworks landed on the roof of the uncompleted construction.[17] One CNN report noted that "the top of the building was exploding". Another observed that the fire spread quickly and that the tower was completely engulfed in flames within less than 13 minutes. "It was obvious that there was a lot of debris on site, [which] ignited very quickly".[18]

No detailed damage estimate has been released yet. The hotel is insured for US$220 million, with the actual amount of the payout to be decided after the police investigation ends.[19] Immediately after the fire, seventeen people were detained, including the head of construction of the CCTV headquarters site, three additional CCTV staffers, the driver who transported the fireworks, four persons who helped guide the shipment to evade police checkpoints, and eight employees of the fireworks company who set off the display.[19]

According to Caijing, the actual cost of the fireworks display was CNY350,000; however, CCTV was billed 1 million for it by a legal entity controlled by Xu Wei, the construction manager. Xu himself is alleged to have received a commission of CNY80,000.[19]

State media announced in early February 2010 that 71 people were being held responsible for the building fire, including head of CCTV Zhao Huayong, who retired in May 2009; the State Council had evaluated direct economic losses at 163.83 million yuan (US$23.99 million). Of the 71 held responsible, 27 would not be prosecuted but would suffer party and administrative disciplinary measures. Zhao would receive an administrative demotion along with a severe warning from the Communist Party of China.[20] In Late February, AFP cited an official in Beijing Number Two Intermediate Court who confirmed 23 people have been charged in the incident. Xu Wei is among those due to be tried, according to state media.[21]

A memo from government officials, which was posted on the Internet, made clear that authorities were eager to downplay the blaze, "a colossal embarrassment that many people believe augurs poorly for the new year", according to The New York Times.[17] The leaked memo read: "No photos, no video clips, no in-depth reports," and further, "The news should be put on news areas only and the comments posting areas should be closed".[17]

No images of the blaze or the building were broadcast on state television, and the Xinhua website sidelined the story.[17] CCTV later reported the news with a video on its website after the fire.[22]

Li Xiguang, journalism professor at Beijing's Tsinghua University said the decision not to show coverage was "stupid" and damaged the credibility of CCTV.[23]

James Fallows wrote that the perils of the fireworks and firecrackers are more than a joke.... that people responsible appear to have been CCTV employees; and that the whole subsequent matter of investigating, publicizing, making sense of, and drawing omens from an unignorable spectacle involving the country's leading propaganda/communication outlet and the city's most distinctive new landmark will say a lot about the emotional and political state of China right now.[24]

Chinese netizens are busy finding humor in an otherwise tragic situation and spreading Photoshopped images, mostly at CCTV’s expense. Large number of commentaries and spoofs (often using the trendy image of Grass Mud Horse) also reflect netizens’ common critical view of CCTV as a powerful and monopoly state-run propaganda machine. Some of the sharper and more critical posts were quickly being deleted by the authorities, but many humorous images and cartoons are being widely distributed.[25]

Jeremy Goldkorn, editor of a website that tracks Chinese media, said among China's young, educated and urban, the stodgy network (CCTV) has long been a subject of ridicule, both for its low production values and its propagandistic news coverage....But the fire—which engulfed what was to be the Mandarin Oriental hotel, a dramatic, angular tower that stands next to the now-iconic CCTV building—provided a new touchstone for critics, prompting the government to move quickly to mute the outrage.[26] 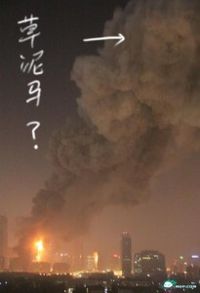 Despite the lack of images on the state media, photographs and videotapes of the fire, taken with cameras and cell phones, swiftly found their way blogs and forums including major portals such as Sina, Sohu, and Youku.[27]

Media reported that Chinese citizens on the internet were taking sarcastic and comical pot-shots at CCTV. It noted there was "a storm" of criticism that the state broadcaster which created one of the year’s biggest news stories failed to report the event promptly, or honestly.[4] Parodies of the incident were also rampant, including edited images often relating to other Chinese internet memes, such as the Grass Mud Horse.[28]

The initial images of the blaze suggested that the tower might be nearly destroyed. However Rem Koolhaas said that "they are simply rebuilding it as it was, because there was no structural damage."

The complex's main building, the doughnut-shaped structure, was not damaged. The building, which was originally scheduled to open in 2009, did not seen any progress towards opening or being visibly repaired by the end of that year. It is currently being repaired[29], and is still slated to open. 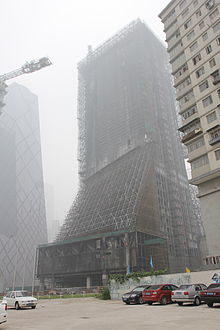 The Beijing Television Cultural Center as seen in July 2011. Construction has resumed after the fire.