Comics Guaranty LLC, also known as CGC, is a Sarasota, Florida comic book grading service. CGC is an independent member of the Certified Collectibles Group of companies. It is the first independent and impartial third party grading service for comic books. The company was launched in early 2000 and has since gone on to become a notable yet controversial part of the comic book collecting community. CGC's current President, Mark Haspel (as of July 2008), is also the company's primary grader.[2]

Comic books CGC for grading and encapsulation either through an authorized dealer or directly by the owner through CGC's Internet partners (at a 10% discount). Comics may also be submitted to the company from an individual who signs up for one of their two membership options, associate or premium, and pays an annual membership fee. The company also accepts submissions in person by sending representatives to several comic book conventions.[3] Upon receipt, the comics are inspected by five experts[4] in a temperature- and humidity-controlled environment.[5] The graders look for damage and signs of alteration. The comic books are then graded on a scale from 0.5 to 10.[6] These numbers correspond with more traditional descriptive grades such as "very fine", "near mint", and "mint", with the higher numbers indicating a better grade.[1]

After grading, the comics are placed in an inner well - a sealed sleeve of Barex, a highly gas-impermeable plastic polymer.[8] Then, the comics are sonically sealed in a hard plastic, tamper-evident holder. This process is often referred to in comics jargon "slabbing". A label is affixed at the top indicating the title, date, grade, page quality, and any notes, such as notable creators. Books which would be damaged by encapsulation are returned without this process. Examples of this include books with cover overhang (i.e., the cover protrudes beyond the interior book), some European variants, and Museum Editions of modern comics. In such cases, the grading fees are refunded and the book is returned ungraded. Although ashcans are graded, CGC will not grade certain black-and-white books (e.g., Eerie #1) as these books may easily be counterfeited. 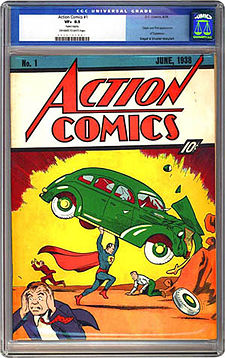 Prior to advent of CGC grading and authentication services, collectors, buyers, and sellers were at the mercy of the marketplace. There was a clear possibility of a conflict of interest as a seller would benefit from exaggeration of the condition to inflate the value and thus increase profits. Likewise a buyer could dispute the condition of a book with the intention of purchasing at a lower price. Restored books are another matter of debate as it can be considered misleading and an attempt to ruse a potential buyer of a comic not to disclose any restoration efforts. Authenticity of a signed book is another issue that can arise in comics collecting. A signed book has the potential to valued more than the exact same book in equal condition. CGC's primary service is to provide a reliable, consistent, and non-partial comic books grading and authentication. Which can greatly mitigate all these challenges and pitfalls that inherent with comic book collecting.[4]

Condition is a significant factor in the valuation of a comic book. An example is Action Comics #1, the first published appearance of Superman. In 2010, 2 copies sold on the comic book auction website comicconnect.com for record prices. One copy was CGC graded 8.0 and sold for $1 million USD[10] . The second book at a later auction, a copy CGC graded at 8.5 sold for a record setting $1.5 million dollars, the most ever paid for a comic book.[11] [9] So with CGC's ability to provide a grading service as a neutral third party from a transaction, this created a degree of impartiality that did not exist before.

Similar as with other collectible markets such as classic cars, restoration and even counter fitting can at times be a problem. Counterfeit comics pose a problem as someone could be paying a high price for something that is essentially worthless. A common counterfeit tactic is to pass off a reprinted edition as an original as has been the reported case several times with high value books such as Action Comics #1.[12] A part of CGC's reported service is to identify authenticity of a comic. One of the first steps CGC takes upon receipt of a book is a pre-grader makes determinations if a book has been restored. Generally an original book will be of more value than a restored book, however this is hotly debated along with the definition of restoration. CGC labels a comic book it has identified as restored with a purple label. Another grade that CGC implemented in 2008 is a NG or no-grade label, that identifies a comic missing cover, but has been authenticated. Authentication is part of the grading process to determine if a submitted book is genuine and not counterfeit. This is another valuable service as a good counterfeit can be hard to detect even by a trained eye.

For highly-valued comics, a higher grade can result in a price difference of thousands of dollars. Similarly, a comic book marked by CGC with the purple "Restored" label (known by collectors as the "purple label of death") can suffer a significant price reduction.[5] As a result, CGC's actions are highly scrutinized by collectors. There has been controversy regarding CGC's policies on conservation, restoration, and trimming, as well as concerns about its impartiality.[citation needed] 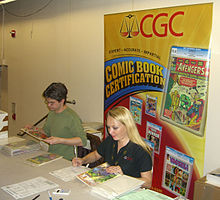 Not all experts agree with CGC's grades.[citation needed] The comic book store chain Mile High Comics offers their customers a refund if a comic book which they evaluated as "Near Mint" is given a lower grade by CGC.[13] For its part, Comics Guaranty LLC has been tight-lipped about its grading standards.[citation needed] In 2001, when the Comics Buyer's Guide changed its "Price Index" column to add Overstreet's grading definitions to CGC's grades, CGC requested that this change be reversed, stating that Overstreet's definitions were not necessarily the same as its own. When asked by the Comics Buyer's Guide to clarify its definitions, CGC declined. However, in July 2003, CGC announced that it had decided to fully adopt Overstreet's grading standards.[14] In October of that year, CGC President Steve Eichenbaum stated that although the company had adopted the Overstreet standards, CGC's standards remained unchanged. Eichenbaum cited the 2002 publication of the 2nd edition of The Official Overstreet Comic Book Grading Guide – with input from CGC's graders – as the reason for the July announcement, stating that "there is now little difference between Overstreet and CGC."[citation needed]In reporting on the subject, Comics Buyer's Guide reporter Nathan Melby asked, "Who adopted whose standards?"[15] According to Mile High Comics owner Chuck Rozanski, prior to the publication of the new grading guide, Overstreet was negotiating a "middle ground" between the standards established in their 1992 guide and the stricter CGC standards. Rozanski questioned the wisdom of changing Overstreet's standards – which could greatly lower the value of several collections – in order to achieve a "political solution" with CGC.[16] In September 2003, CGC changed the labels it puts on graded comics, removing most descriptive terms used by Overstreet ("near mint", "fair", etc.), instead using just CGC's own numeric grading scale.[17] On CGC's message board, the company's then-President Steve Borock explained that this change was made so that the numeric grade would be larger and easier to see. He added that the descriptive terms which were removed are becoming obsolete.[citation needed] Overstreet now uses both the numeric point grade and the alpha descriptive grade in their annual price guide and their official grading guide.[18] Likewise, CGC's grading guide now lists the corresponding descriptive grade next to the numeric grade.[6]

After the discovery of a micro-trimmed issue of Fantastic Four #3 which CGC did not detect, other undetected restorations were found and CGC posted an official announcement, banning the restorer, Jason Ewert, from doing business with CGC.[citation needed] CGC also announced on their message board that they would recheck any and all Ewert books for free.[citation needed]

In the collectors' market, unadulterated original works are considered more valuable than repaired works. However, there is disagreement among comic book collectors on the definition of restoration. Some collectors feel that any work done to improve the quality of a book should be defined as restoration. CGC defines it as "treatment that returns the comic book to a known or assumed state through the addition of non-original material for aesthetic enhancement".[19] CGC does not consider the following to be restoration and comics with these conditions may receive their blue Universal label: tape removal, dry cleaning (i.e., erasing pencil writing or surface grime with an eraser or other object), tucking loose wraps back under a staple,[citation needed] disassemble and reassembly of a comic,[citation needed] certain staple replacement, and pressing.[citation needed]

Pressing, that is, using heat and pressure to smooth out wrinkles, is one the most controversial topics in comic book collecting.[citation needed] Some collectors feel that such changes should be called restoration.[5] CGC's president, Steve Borock, has expressed a different view. Interviewed for the Iron Slab website column Borock said, "Who cares? Really, when you get down to it, dealers and smart hobbyists have been doing it for years and years." He added, "The biggest complainers are the guys who don't want the collectors to have a level playing field. Taking a bend or fold that does not break color out of a comic book is not a bad thing. It is not like you are adding glue and/or color touch, using something artificial, to bring paper closer back to look like its original state. You are bringing it back closer to its original state. I and many of the top collectors and dealers have never seen a problem with this."[20] In an interview with the Wall Street Journal, Borock offered the analogy, "When you're buying a used car, do you say to the guy, 'Hey, did you wash this?' "[5] Critics say that this policy encourages sellers to press comics without disclosing it to buyers.[5]

Also, if it meets CGC's approval, reassembly of a comic might not be counted as restoration.[citation needed] In one case, a book which had previously received a low grade was given a much higher rating after two loose center pages were reattached.[citation needed][clarification needed]

Various concerns have been raised regarding CGC's impartiality and independence from other companies. In October 2005,[citation needed] CGC's parent company, the Certified Collectibles Group, announced the launch of a new separate company called Paper Conservation Service (PCS) with CGC's main restoration expert Chris Friesen as its President. The company's stated purpose was to "perform conservation to prolong the life of a comic book". PCS defined conservation to include deacidification, structural repair, reinforcement, pressing, and dry cleaning. The announcement also differentiated between conservation and restoration, saying that the company would not perform services which it defined as restoration. PCS also planned to offer consulting services regarding comic book conservation.[citation needed] However, the Certified Collectibles Group announced PCS's dissolution in April 2006, two months after the company's planned incorporation. Steven Eichenbaum, CEO of the Certified Collectibles Group cited the perceived conflict of interest between CGC and PCS as the reason for the decision.[21] One concern was that comics with restoration could be "unrestored" to the point where they would receive the blue Universal label and could then be sold as if the comic had never been restored. Steve Borock confirmed this possibility in an interview [20] and also on CGC's chat board.[citation needed] Another issue is that Jim Halperin, co-chairman of collectibles auctioneer Heritage Auction, owns stock in CGC. This has led to accusations of Heritage Auction giving preferential treatment to auction items graded by CGC. Although the stock ownership has been confirmed by both Halperin and Steve Borock, they deny any favoritism.[20]