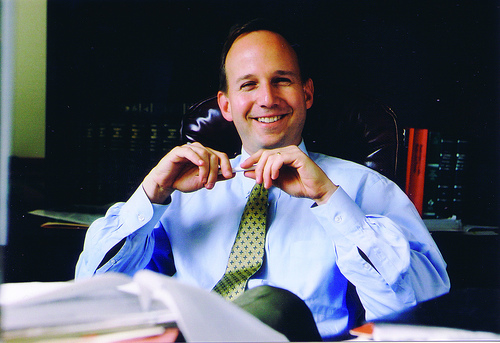 Jack A. Markell (born ) is an American and from Centerville, in , . He is a member of the Democratic Party, who is the state of . He is serving his third term and is the Democratic nominee for Governor of Delaware in 2008. If elected he will be Delaware's first Jewish governor.

Markell graduated from Newark High School and in , with degrees in and and received an degree from the . He is married to Carla Markell, whom he met while attending Newark High School. They have two children, Molly and Michael.

Markell served as Vice President for Corporate Development at , where he was responsible for coming up with the name “Nextel,” and helping to lead the movement to wireless technology. His other work experience included a senior management position at as well as posts as a consultant at McKinsey and Company, Inc. and as a banker at First Chicago Corporation.

Markell was first elected State of in 1998, unseating Republican incumbent Janet C. Rzewnicki, and was re-elected in 2002 and 2006.

As State Treasurer, Markell has led the development of several educational efforts in personal financial management, known collectively as "the Financial Literacy initiatives." He created the Delaware Money School which offers free classes to Delawareans throughout the year on topics such as saving for college and retirement planning. He also began the “Delaware Bank at School Program” which takes banks and financial education to schools. In a third program, he has partnered with the , Center for Economic Education and Entrepreneurship, as well as leading Delaware banks, to teach young children the basics of money and savings.

In 2001 Governor chose Markell to chair the Information Services Task Force, which developed and implemented recommendations to modify the state's management of information technology. In 2002 he led an effort to streamline and coordinate the procurement of goods and services while using state of the art purchasing techniques. He has also led the “Health Rewards” initiative which offers Delaware state government employees with comprehensive physical assessments, detailed statistics about how their health compares with their peers across the country and recommendations about how they can improve their health.

For several years, Markell has helped lead a campaign, sponsored by the Nehemiah Gateway Development Corporation, to promote awareness of the federal earned income tax credit and, since 1999, Markell has been chairman of the Delaware College Investment Plan..

Markell had over $1.5 million in his campaign fund, raising about $600,000. $750,000 of his campaign war chest was a loan from him to his campaign organization, Friends of Jack Markell. Erik Schramm, former campaign coordinator for Gov. Ruth Ann Minner's re-election, ran Markell's re-election campaign team. Working along side Schramm was Dana Rohrbough, who was campaign coordinator for Matt Denn's insurance commissioner campaign in 2004. The two former heads of Markell's campaign represent the combination of the campaign teams from the two most competitive races in 2004, governor and insurance commissioner.

In 2002 the “Delaware Financial Literacy Initiatives” were chosen by the Council of State Governments as one of the top state government programs in its innovation awards program. Then in 2004 the “Health Rewards” initiative was chosen for the same recognition.

At the , Markell was selected by the as one of the 100 "rising stars" of the party. That same month New Democrat Magazine spotlighted him in a group of just ten innovative leaders from around the country under the age of 40. In October 2001, Philly Tech Magazine named Markell as the only Delawarean and the only government official on its list of the ten most influential technology leaders in the Philadelphia region. In 2004, the selected Markell as the first Delawarean and first elected official for its Crown Fellow program.

Markell was the heavily favored candidate for reelection as State in 2006. He had no primary opponent and his general election opponent was Republican Esthelda R. Parker Selby. He won the 2006 election with 70.5% of the vote.

Beginning in the summer of 2007, Markell has released 14 policy papers on issues ranging from energy, to health care, to education. All policies are available on Markell's website, www.markell.org. The major difference between Markell and his primary opponent, Carney, are their plans for universal health care. Markell's plan has been described as completely universal, while his opponent has offered what he describes to be an "incremental approach."

University of Virginia political science professor wrote on his nationally recognized website, Crystal Ball '08, that "Jack Markell appears to have the momentum for now as John Carney is stuck with the baggage of the Minner administration." Sabato goes on to cite "a poll [which] found Minner to be the 38th ranked governor in the nation, with a 42 percent approval rating and a 53 percent disapproval rating. Prior to Markell's announcement for Governor, released a poll citing Markell's 55% approval rating compared to Carney's 47% approval rating.

Markell has been endorsed by 21st Century Democrats and Democracy for America. In response to Carney's list of approximately 600 public supporters, Markell released a list of almost 3000 supporters. Markell will face Carney in the September 9th Democratic primary.

Jack Markell won the primary election on September 9th by a 51/49 margin according to the unofficial results from the state election website at http://elections.delaware.gov/results/html/election.shtml

Elections are held the first Tuesday after November 1st. The State takes office the third Tuesday of January and has a four year term.