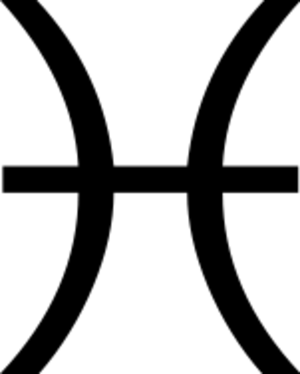 Pisces is the twelfth in the , which originates from the Pisces constellation. In this sign is no longer aligned with the constellation because of the precession of the equinoxes. Pisces is represented by a pair of that are swimming in opposite directions, but remain held together at the tail by a cord. In , Pisces is considered a , and is one of four s. [Jeff Mayo, "Teach Yourself Astrology", pp 38-41, Hodder and Stoughton, London, 1979] Like the rest of the watery signs, Pisces is considered a "negative", feminine sign, which in means it is rather introvert. Being the twelfth sign, Pisces is associated with the astrological 12th house.

Pisces has been traditionally ruled by the planet Jupiter, but since its discovery, Neptune has been considered a modern ruler of this sign. Some astrologers mostly use one to the exception of the other, but some consider them to be co-rulers of this sign and essentially use both (see Domicile).

Individuals born when the Sun was in this sign are considered Pisces individuals. Under the , the Sun is in Pisces roughly from to ,

One of the most popular stories regarding the mythological origin of Pisces is the story of and . The story involves Aphrodite and her son Eros escaping from the terrible monster by turning themselves into and hiding underwater until it was safe to come back to the surface. As fish, they tied their tails together with a cord so that they wouldn't lose one another while swimming in the darkness of the deep . Upon hearing their tale, Zeus rewarded the pair by placing them among the stars as the constellation of Pisces. [cite web|url=http://skyscript.co.uk/pisces_myth.html|title=Star Lore of the Constellations Pisces the Fishes]

As a constellation, Pisces has been almost universally associated with female deities.

The Pisces symbol ( the H ) is often associated with Helen of Troy - Beauty and love.

In the story they were actually turned into Dolphins which are mammals but at the time they were mistaken for fish.

The following traits are widely associated with Pisces.

Their lips will tend to be full with a pursed or puckering quality, the jaw is generally weak or subdued, and in some people, there will be a tendency to double chin. The nose is generally small, the facial features will be rounded, especially the cheeks, which may be prominent in some way, reminding you of the gills of their zodiacal mascot. The eyes similarly, may appear to bulge with somewhat of a sleepy or dreamy expression, and in them you can get the distinct impression of wisdom, mystery or spiritual depth. For this reason, Pisces' eyes are perhaps the most beautiful in all the zodiac. The neck is generally graceful, meeting at the shoulders with a certain smoothness of line. Most Pisceans are tall, with some short individuals. [ The Diagram Group, "The Little Giant Encyclopedia of The Zodiac", pp 159, Sterling Publishing Company, New York, 1997 ]

Pisces is widely considered to be naturally compatible with the same element signs, Cancer

There are many variables that determine compatibility in astrology, such as birth dates, birth months, birth years, position of a sign within the Sun, the Moon, Stars, etc. The signs listed as compatible with Pisces do not reflect an "individual profile" or "individual reading" as interpreted within astrology, but rather reflect a general guideline and reference to compatibility as dictated by variables such as "Qualities" and "Elements" within the .

The Indian equivalent of Pisces is Meena.Fact|date=January 2008

The Chinese equivalent is thought to be the gentle, diplomatic Rabbit, whose lunar month is 6 March - 4 April. [Theodora Lau, "The Handbook of Chinese Horoscopes", pxxvii, Souvenir Press, London, 2005]