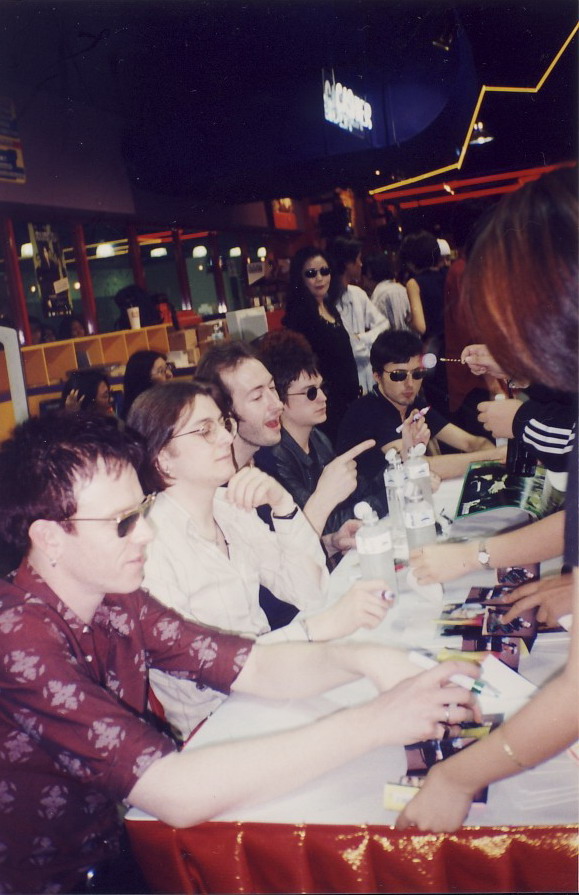 
Suede (or The London Suede in the ) were an English rock band of the 1990s and the early 2000s that helped start the musical movement. Through their several incarnations, they were able to consistently put out albums that charted well, while still holding the respect of critics. Though they never achieved great success in , they were considered to be one of the most successful British rock bands of the 90s.

Suede were formed in London in 1989 by bassist , singer and his then girlfriend, , on . They soon added guitarist who was recruited through an advertisement in and used a drum machine as percussion. Suede were signed to RML Records, a label from . Comedian managed the band for a brief period before they were signed to a record label. With (formerly of ) famously filling in as drummer, Suede's first record "Be My God"/"Art", was printed but never released due to a dispute with the label. The few surviving records out of a batch of 2000 are considered amongst the rarest of Suede collectibles. Simon Gilbert soon replaced the drum machine and Suede signed to . Though still living with Anderson, Frischmann was ejected from the band around this time because of her failure to attend rehearsals.

The band's first single "" was released amid an alternative media frenzy that began before the band had released any music. The band was on the cover of "", which proclaimed them as "the best new band in Britain" prior to an official release. The debut single attracted so much excitement because of its sharp contrast to the dying scene and the U.S. grunge sound of the time. [Youngs, Ian. [http://news.bbc.co.uk/1/hi/entertainment/music/4144458.stm "Looking Back at the Birth of Britpop"] . "BBC News". Aug. 15, 2005.] Suede were further distinguished from their contemporaries by Anderson's flamboyant looks and unique vocals, combined with Butler's melodic guitar playing. Surprisingly, given the amount of press exposure the band had received, "The Drowners" – featuring two B-sides in "My Insatiable One" and "To the Birds" – was only a moderate hit. Two follow-up singles hit the UK Top 20: "Metal Mickey" and "".

Their first album "Suede" became the fastest-selling debut since Frankie Goes to Hollywood's "Welcome To the Pleasuredome" and it was catapulted onto the charts after a performance on the 1993 . Featuring heavily-layered production by , the album showed influences from indie rock band and and other glam rockers which were filtered and blended to create a trademark sound. Their American success was limited, despite securing a tour slot with , who had support from . Moreover, a 's forced the band to stop using the ed American name "Suede" (a fate also suffered by fellow U.K. band The Charlatans/The Charlatans UK). For the North American market, the band released all of their future albums under the moniker The London Suede. Anderson wasn't happy about having to change the group's name in the U.S., as he stated: "The London Suede is not the name I chose for the band, I didn't change it happily, and I'm not going to pretend I did." [Strauss, Neil. [http://query.nytimes.com/gst/fullpage.html?res=990CE7DB103AF93AA35751C0A963958260 "The Pop Life"] . . Feb 9. 1995.]

Some possible factors cited to explain the band's lack of U.S. success are their quasi-androgynous look and distinct British sound, both of which might have alienated North American audiences. Despite this, the band retained a cult following in the U.S., which was evident by their first four studio albums charting on ""'s Heatseekers charts,

When "" (1994) finally appeared, its sales were generally sluggish, though the album was praised by critics. The record was vastly different-sounding than the band's debut. It featured a spacious sound that was fleshed out by strings and a horn section. While Blur's "Parklife" and Oasis' "Definitely Maybe" were fighting for pop supremacy, Suede explored darker territory. The vacant guitar chair was soon filled by 17 year-old guitarist Richard Oakes (initially nicknamed by the U.K. music press as "Little Dickie") before an international tour to promote the album. Many critics and fans alike had their doubts about the ability of the band to move on without Butler, who was an integral part of the band's songwriting. The band broadened their sound with a keyboardist and backing vocalist for their third album, "" (1996). The first single from the album, "Trash" was popular and tied with "" as the group's highest charting U.K. single, reaching number three, which helped to make the album their biggest mainstream success.

The album was a hit throughout Europe, Asia and , but still not in the U.S. It did, however, answer the critics who questioned whether Anderson and company could produce another hit without Butler. Suede had again changed sound drastically; "Coming Up" featured more of a glam-tinted pop/rock sound, as opposed to the darker elements of the previous albums. Reviews were again mixed, but the album topped the U.K. chart and became the band's biggest-selling release. The band was finally getting the mass video and radio play that they lacked during the "Dog Man Star" period and in many ways fulfilling the hype that characterized much of their early career. The album brought the band five straight top-10 singles. The band's next venture was a collection of B-sides and rarities entitled "", which reached #9 on the U.K. chart.

By the time the compilation was released in 1997, though, the Britpop movement was noticeably waning in popularity, and the band had decided to split with long-time producer Ed Buller before commencing work on their follow up to "Coming Up". Before focusing work on their next album, the group recorded a version of "Poor Little Rich Girl" for the "" in 1998. Despite being backed by the popular lead single "Electricity", Suede's fourth album, "" (1999) was something of a critical disappointment, though it once again took the band to number one on the album charts. A synth-infused album that focused less on guitar riffs and more on keyboards, it was produced by , who had worked with and . Critical opinion was sharply divided; many felt the record was too shallow and lacking in substance, while others thought the album was the group again taking a different direction and charting new territory.

The next three singles released from the album failed to crack the top 10, breaking a run stretching back to 1995's "". The b-sides for the singles were also arguably not up to par with their usual standard, which hinted at the drying up of the creative well. Anderson also began being criticized more by fans for his often use of redundant vocabulary and limited lyrical themes. Despite this, even with their drop in mainstream popularity, the band still maintained a large core group of fans. Not long after the release of "Head Music", effectively ceased to exist. Like many of their labelmates, Suede ended up signing to Nude's parent company/distributor Sony to record their fifth album, "" (2002). The long and troubled gestation of the album saw keyboardist leave the band, citing , to be replaced by long-time band associate Alex Lee, formerly of Strangelove. [Cohen, Jonathan. [http://www.billboard.com/bbcom/search/google/article_display.jsp?vnu_content_id=805726 "Billboard Bits: Fatboy Slim, Suede, Keb' Mo'"] . . March 23, 2001.]

In concerts, Lee played second guitar, as well as keyboards, and, at one point, . The album title, according to Anderson, referred to "a fresh start, a new band and a new fresh outlook" – the singer had reportedly been addicted to and crack for a number of years by this time, which was having an increasingly deleterious effect on his health. He was quoted at the time as saying "we've all cleaned up our drug problems ... which is nice." Despite the rejuvenation of the group's health, the album was a commercial disappointment which failed to crack the top 20, and ultimately was never released in the U.S. [Carpenter, Troy. [http://www.billboard.com/bbcom/search/google/article_display.jsp?vnu_content_id=1885938 "Billboard Bits: Memorial Day, Anastasio, Suede] ". . May 12, 2003.] Although the group began work with producing, [Carpenter, Troy. [http://www.billboard.com/bbcom/search/google/article_display.jsp?vnu_content_id=897731 "London Suede Begins Recording New Album"] . . June 21, 2001.] the album was produced by "big name" Britpop producers (who famously produced ' debut LP, as well as records for and Muse) and (most famous for his work with and Blur), "A New Morning" was considered a solid enough outing by fans of the band, but critical reaction was decidedly lukewarm and the mainstream public interest had long disappeared. Only two singles, "Positivity" and "," were released from the album, the fewest singles taken from any of the band's albums, and neither charted particularly well.

In Autumn 2003, after the release of their "Singles" compilation album and accompanying single "Attitude", Suede played five nights at London's , dedicating each night to one of their five albums and playing through an entire album a night [Carpentor, Troy. [http://www.billboard.com/bbcom/search/google/article_display.jsp?vnu_content_id=1953825 "Billboard Bits: Suede, Diane Schuur, Alejandro Escovedo"] . . Aug 11, 2003.] – with B-sides and rarities as encores – in chronological order. After these shows, the band announced there would be no more projects under the Suede name for the foreseeable future – effectively announcing the end of the band, as they stated on their website: "There will not be a new studio album until the band feel that the moment is artistically right to make one." [Cohen, Jonathan and Troy Carpenter. [http://www.billboard.com/bbcom/search/google/article_display.jsp?vnu_content_id=2018530 "Suede Calls it a Career"] . . Nov 6, 2003.] Their last concert at London's Astoria on , was a two-and-a-half hour marathon show, split into two parts (plus encore) with the first part being "songs we want to play". Brett made an announcement that "there will be another Suede album" to everyone's delight, but added "...but not yet." [Author unknown. [http://www.nme.com/news/suede/15741 "See You in the Next Life"] . . Dec 13, 2003.] "See you in the next life" was their closing remark.

In May 2004 Anderson confirmed rumours that he and original Suede guitarist were working together again – they had written 15 songs and were putting together a band, , who have since released their debut album "", to critical acclaim and with moderate commercial success, though a follow-up seems a distant possibility with Anderson investing time in his solo career and the band officially on hiatus. To date, Anderson has released two solo albums, self-titled solo album in February 2007 and "Wilderness" in 2008.

Alex Lee played a short set with former Strangelove band-mate at the Tsunami Appeal Gig at the on Saturday 19th February and continued to tour with him. He now plays guitar and keyboard with Placebo. Neil Codling has toured as keyboardist for pop singer and has played as a duo called "Barry O'Niel" comprising him and Harriet Cawley and live for . Gilbert is currently the drummer for international band Futon, based in , while Osman plays for the rock band Mista Brown and live for Brett Anderson.

Suede's legacy is largely in inspiring the Britpop scene which eventually overshadowed the band's own achievements. wrote in 2005, "These days, rock historians tend to depict Suede's success as a kind of amuse bouche before the earth-shattering arrival of Britpop's main course". [Petridis, Alexis. " [http://arts.guardian.co.uk/critic/feature/0,,1465039,00.html Frankly I hated Suede] ". "". Retrieved on 16 June 2008.] Thanks to the band's popularity British guitar music was once again brought to the forefront paving the way for the success of Pulp, Blur and Oasis. According to the book , was said to have written "" in an attempt to create a better anthem than "". Recent/current bands inspired by Suede include and - with both artists having used to record singles - as well as Pete Doherty's offshoot band , , , Placebo, and Franz Ferdinand.

All the chart positions are for the UK, except where noted.