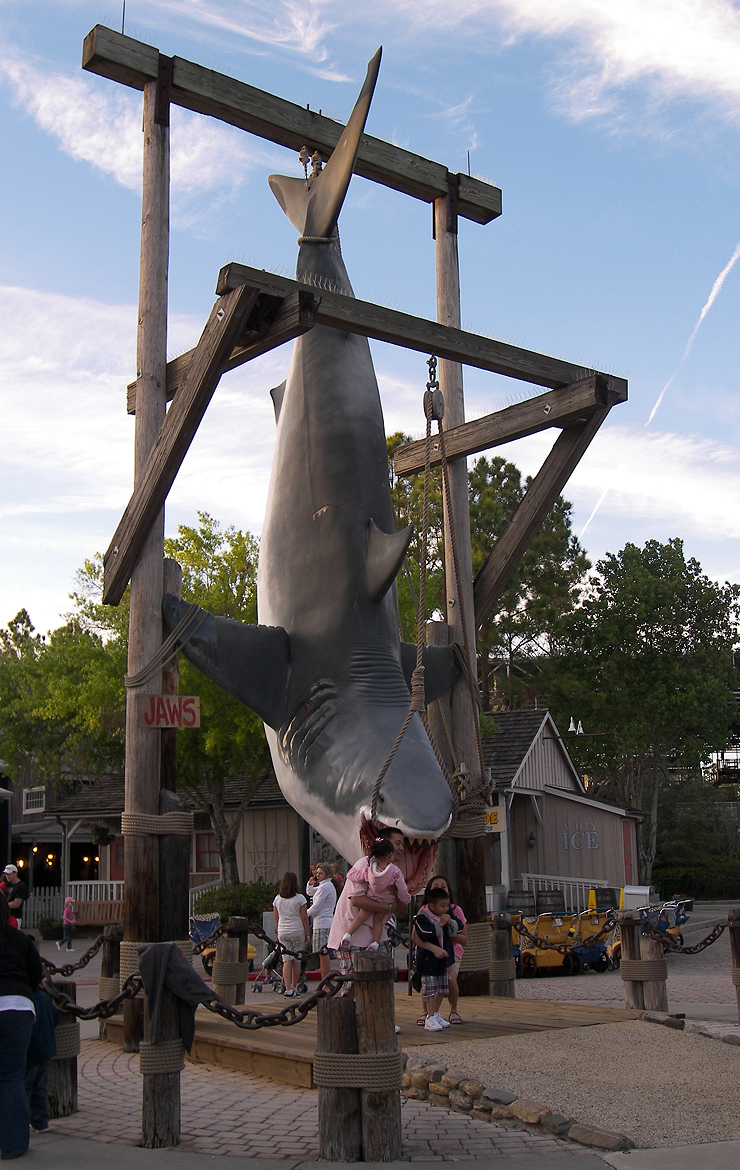 Jaws is an attraction based upon the films of the same name. The attraction places guests aboard boats for what should be a leisurely tour of Amity Harbor, but instead becomes a harrowing chase between the craft and a very determined . "Jaws" is an expanded version of a famous scene on the long-running backlot tour at , also inspired by the movie, and can be found at in Orlando. A near-duplicate version can also be found at near Osaka.

After the shark "Jaws" was eventually destroyed by Chief Brody and Quint, the tourisim on Amity Island strongly decreased. However, seaman resident Jake Grundy decided to open a new boat tour on the island which takes visitors out to the historic areas where the shark attacks occurred. This ultimately brought back the tourism to the Island.

When visitors enter 'Captain Jake's Amity Boat Tours', they must walk through a boathouse located on the island, which holds various fisherman supplies and TV screens which display the programs on Amity's TV station, WJWS13. Visitors will next board one of Grundy's boats.

Tourists will be taking one of "Captain Jake's Amity Boat Tours" out to see the locations of the various events during that fateful summer, which were made famous in a big movie not long afterwards. The boats are piloted by one of Captain Jake's skippers, and all are protected by an army surplus 40 mm . However, Jake is confident that his skippers won't need to use them because the last shark that anyone has seen was in .

The tour begins with a quick visit to Chief Brody's home. Suddenly, as the boat rounds the lighthouse, the guide hears a distress call from a fellow skipper, Gorden. His call for help degenerates into screams of terror, then an eerie silence. The skipper contacts the base to figure out what is going on with Gorden and seconds later, the tour group discovers just what happened, as the remains of Gorden's tour boat sink beneath the surface of the harbor.

The in-charge skipper looks around in worry and mixed horror. Suddenly, a rises out of the water ... the dorsal fin of what appears to be a very large shark! The shark submerges and passes under the boat. The tour guide pulls out the now-handy grenade launcher (whilst saying, 'Wait, these things are actually loaded?!) and shoots a grenade at the shark, but it misses. A second shot also misses. The tour guide then decides to hide out in a boathouse that was formerly owned by the grizzled old shark hunter, Quint. Inside the pitch-black boathouse, the skipper turns on his flashlight and scans around. Something rocks the shack, knocking boats into the water. Attempting to escape, the skipper struggles to get the boat's engine into gear, succeeding just as the giant shark surfaces and grazes the side of the boat-mouth wide open-.

The skipper contacts the base to get help, and is told that Chief Brody will be there in 10 minutes. Thinking the boat—and its passengers—will be shark bait in 10 minutes, the skipper decides to take the offensive if the shark attacks again. Unfortunately, the next grenade shot manages to hit a gas dock, which erupts in flames, threatening the boat. As a last resort, the skipper decides to unload in an old fishing dock.The shark circles and rocks the boat from under. Then suddenly, shark attacks yet again, but one last shot from the skipper's grenade gun and the shark explodes in a cloud of smoke, showering the left side of the boat with water. Its desiccated corpse then surfaces, then slowly sinks to the bottom of the lake, but not before making one last jutt towards the boat, and the latest menace to the tranquility of Amity Harbor is eliminated.

The "Jaws" attraction has been closed three times in the past, each for new renovations.

The ride first closed in Late 1990, Due to major technical difficulties. Almost all of the original ride has been changed after this closure including the following:
*"Boats"The canopy of the ride's boats were originally curved, but are now flat.
*"Skipper Uniforms"The skippers for the ride would originally wear a white sailor's hat, but now do not wear any type of hats.
*"Quint's Boat Shack"The wooden building that you pass on the right at the beginning of the ride was originally a boat shack which the Jaws character 'Quint' owns, with a duplicate of the Orca outside it. This building has been renamed Steven's Canery, with the Orca removed.
*"Boats Being Pulled By Jaws"After the boats exited the boat house, Jaws would appear and turn the boat counter-clockwise by 90 degress before losing his grip. This section has been turned into the gas dock area of the ride.
*"Ending"At the finale of the ride, Jaws would appear once again and the skipper would shoot a grenade into his mouth followed by Jaws "exploding" into bits and pieces, with blood gushing through the water. The ending has now been changed.

After the rising prices of gas (used in many sections of the ride) due to the recent hurricanes, Universal was forced to temporarily close the attraction until December 2006. During this time, new renovations were added to the ride including the following:
*"Water Effects"Water effects were added to the sinking Amity 3 boat, Causing guests to be splashed.
*"Fire Effects"Some fire effects have been removed from the gas dock portion of the ride.
*"Queue"The queue has been cleaned, and the area on the right is now only used when the ride's queue is overloaded.
*"Jaws Animatronics"The Jaws animatronics have been painted with more red, to give the sharks more cuts and scars.

*Orca returned after being away for a month. The new ship is freshly painted but doesn't say "ORCA" on it yet.

*Rollers added under the boat to make the boat shake during the first shark encounter.

*There are over 20 'business façades' on Amity Island.
*Throughout the streets of Amity you will see red, white and blue triangles hanging from the light poles, the year says '76, the setting for all of the Amity section of the park, even the music played is from that era. Sources say the triangles were left from the original 1990 version of the ride.
*Throughout the queue and attraction you will see shoes of JAWS employees who have left throughout the years.
*There is over 1,140 feet of track used in the attraction.
*Amity Harbor holds approximately 5 million gallons of water.
*The sinking Amity 3 boat is one of the only remaining parts of the original 1990 JAWS attraction. Although the body structure has changed a bit, and it actually comes down.
*The voices that are heard over the speakers on the boats were recorded by skippers when the ride was opening.Fact|date=January 2008
*Amity 3 is dunked into the water and pulled back to its normal "sinking" position over 800 times a day, the diesel from the boats cause the canopy to be discolored.
*The grenade launcher's water explosions are not set off by the Skipper, they are timed and the Skipper must memorize when they are set off. The trigger of the grenade launchers do send a signal to the computer on the back of the boat to set off the sound, though.
*The two shark fins used to have their back tail fins move back and forth to imitate a real shark. This effect is now turned off because it would occasionally knock the sharks off track.
*During a shark's attack, the shark moves through the water at speeds of 20 feet per second and thrusts with power equal to a 727 jet engine.
*As of March 12, 2008, the fishing boat used as a prop outside Brody's house is labeled as being from Gloucester, MA, the same city "The Perfect Storm"'s "" boat was based out of.