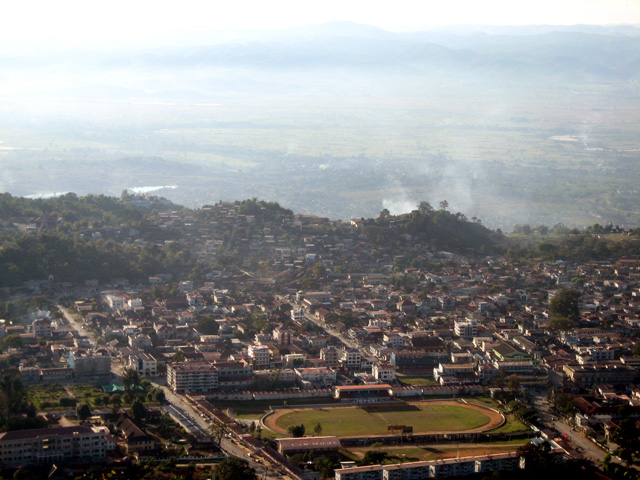 imagesize =
image_caption = A view of Taunggyi

Prior to British colonisation, Taunggyi was a small village of a few huts. The area lay on a wide shoulder of the Sintaung Hills of the Shan Plateau and was populated by the ethnicity at the time. The signs of the original village of Taunggyi are long gone, but nearby villages can still be discerned quite easily.

During British occupation, the town became the chief city and capital of the Southern Shan States. Taunggyi's modern development began in 1894, when the British moved their administrative offices from (Fort Stedman) on the eastern shores of Inle Lake to the higher elevation of Taunggyi, for health and geographical reasons. Although geographically within the state of , the town was denoted as a "notified area" by the British, exempt from the 's administration. By 1906, there existed a thousand houses. Because of civil unrest throughout the Shan States during the early 1900s, Taunggyi served as the chief garrison for military police. Taunggyi also served as a supply centre for the Shan States, and catered to persons of many nationalities.

The main access to Taunggyi is by road. A railway line that passes through Taunggyi was recently built in 1995, but at the moment it offers no passenger service. Regular railway passenger service to the rest of the country is through the town of Shwenyaung, twelve miles to the west. The nearest airport is in the town of , mi to km|24|wiki=yes by road to the west of Taunggyi.

Taunggyi is the melting pot for the Myelat area of the Shan State. In addition to the indigenous and , there is a significant population of Shans, s, other native ethnic minorities, as well as Chinese and . Like in most of Myanmar, influence of Buddhism is most evidenced by the monasteries scattered throughout the city. However, being a relatively new city, the monasteries are not of historical significance and architecturally not unique. There is also a significant Christian population, as the center of the Roman Catholic the St. Joseph's Cathedral and its associated seminary are the main facilities, as well as a Baptist Church, both established by early missionaries. There is also a smaller , which originally served the British administrators, but recently it has fallen into a state of disrepair. Four s serve the Muslim population of the city, Myo Oo Pali, A Lae Pali and Taung Pali are for large population of Burmese Muslims, and Panthay Pali for the Chinese Muslims. There are also a few temples serving the Chinese Buddhist community.

The Taunggyi area is a popular tourist destination. The city itself has an interesting five-day market, where farmers from around the area would come to the Taunggyi on market day and sell fresh produce in the open market, but with more development of the city, the significance of market day has been lessened. However, the market-day tradition continues strong in the outlying small towns. Nearby, Inlay Lake is the home of the unique Intha culture. The drive to the provides a good view of the country. Nearer to Taunggyi at the Kat-ku, one can see hundreds of stupas dating to the 16th century.

There is no significant industry in Taunggyi. It used to be the trans-shipment point for many of the agricultural products of southern Shan State. However, due to recently imposed zoning regulations, most of these operations have been moved to the surrounding new town of Ayetharyar.

Being the capital of the Shan State, Taunggyi hosts many government offices. There is a museum in town which has displays on the Shan culture, as well as items of historical interest, such as belongings of the . The city is also the headquarters of Eastern Command of the (Burmese Army), and the army occupies a significant portion of the northeast area of the city.

The city is home to the and .

-the state museum lies in Taunggyi.