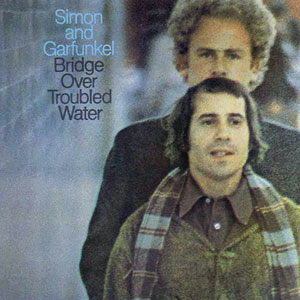 
"Bridge over Troubled Water" is the fifth and final studio by Simon and Garfunkel.

The album proved to be a vast success in the , enjoying several runs at number one, spending some years in the charts and eventually becoming the country's biggest-selling album of the 1970s. In August 2006, the continued popularity of the album was proven when it charted 7th place in The Music Club Top 100 Albums.

In 2001, the named "Bridge over Troubled Water" the thirty-third greatest album of all time. RS500|51

A remastered and expanded version of the album was released on CD in 2001, also containing "Feuilles-O" and a previously unreleased demo version of "Bridge over Troubled Water."

All songs by except where noted.

* released an album with the punning title "Trouble over Bridgwater".
* The "Bridge over Troubled Water" LP is Columbia Records' best selling album [http://www.songfacts.com/detail.php?id=247] .
* The album is fourth on most cumulative weeks at number 1 on the UK Charts.Fact|date=July 2008
* The song was also covered by on his album ""