In the Flesh (Blondie song)

In the Flesh (Blondie song)

Infobox Single
Name = In the Flesh 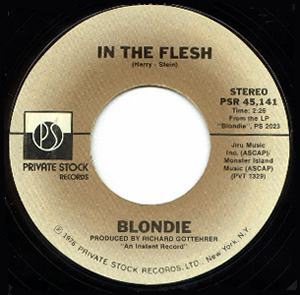 Lower caption = Australian edition of the "In The Flesh" single - the very first Blondie single to be issued on the Chrysalis label.

"In the Flesh" is a song by American New Wave band Blondie. Originally from the band's self titled debut album, "Blondie", the song was Blondie's second and final single on the Private Stock label. The song was used as a B-side to their first US and UK Chrysalis single "" along with "".

In Australia, after the song was played by mistake on the nationally broadcast music program "Countdown", it was well received by the viewing audience. released the song as a single in Australia, with "Man Overboard" as the B-side. When it reached number 2 on the charts, Australia therefore became the first territory in which Blondie achieved a hit single.