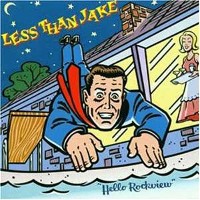 
"Hello Rockview" is the third major album written by band . It was released on , , and is their second and final album on . The album was recorded at Mirror Image Studios in , once again with producer Howard Benson. This is the first album to feature new trombonist Pete Anna, who joined the band during recording. The album is dedicated in memory of "Niki Wood". "Hello Rockview" was re-released with "" as a double album in 2000.

"Hello Rockview" is considered by many to be the band's strongest album, and features a number of perennial favorite songs, including "All My Best Friends are Metal Heads." Though never made into a music video, the album's song "History of a Boring Town" received a decent amount of radio airtime and made its way to #39 on the Billboard Modern Rock Tracks Chart [AllMusic Charts: [http://allmusic.com/cg/amg.dll?p=amg&sql=11:ajfqxqugldse~T51 Less Than Jake singles] Accessed ] .

The CD booklet gained some notoriety for being in the unorthodox format of a comic book. Illustrated by Steve Vance (who would later illustrate the song artwork for "The Ghosts of Me and You" on "Anthem"), the comic is stylistically similar to . Each page is a separate song, with all dialog, thoughts, and captions being comprised of the lyrics to each song. The lyrics themselves all appear in proper order, but the order of the individual songs is different from that of the track list.

Trivia|date=May 2008
* During the recording of this record, trombonist Buddy Schaub was in a bicycle accident and was said to look "like Rocky did in one of those movies after he lost a fight".
* In the two years between "" and this album, the band went through two touring vans.
* The finger-tapping guitar solo in "Help Save the Youth of America from Exploding" was a tribute from guitarist Chris Demakes to his favorite record.
* The spoken intro to "All My Best Friends Are Metalheads" was a pro- speech written by . The excerpt is from his speech "An Open To Letter To My Teenage Son".
* "Five State Drive" is about the band's constant touring and how they would sometimes drive through five different states just to get to the next show
* The "Alley" is portrayed in the "Gainesville Rock City" music video
* "Great American Sharpshooter" is dedicated to band friends "Kirk and John".
* "H Street" was a house in which drummer stayed for two years, and then wrote the song "Theme Song for H Street" about that house.
* "Richard Allen George... no, it's just Cheez" is dedicated to band friend "Rich", who does in fact have a cheese , loves the band Fear, and sometimes refuses to respond to any name but "Cheez" when drunk. The chant at the end of the song was recorded on when 61 fans decided to chant about their mustaches to celebrate what they called "Cinco de Mustache" on the tour.
* Both "Richard Allen George...No, It's Just Cheez" and "Scott Farcas Takes It On The Chin" appeared on various 7" vinyl releases
*"Scott Farcas" is the name of the bully that appears in "A Christmas Story"
* The Song "All My Best Friends are Metalheads" appears on the soundtracks for and .
* The Song "Help Save the Youth of America from Exploding" appears on the soundtrack For the film .