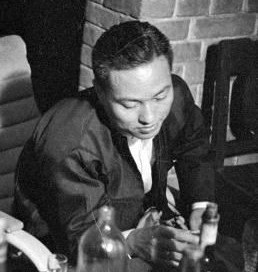 U Ba Swe (, - ) was the second (Burma). He was a leading Burmese politician during the decade after the country gained its independence from Britain in 1948. He held the position of prime minister from to . When Ba Swe became prime minister, "" magazine reported the news in an article titled: 'The Day of the Tiger' based on his nick name 'Big Tiger' ("Kyah gyi" Ba Swe) since his university days in the 1930s as a student leader. [cite web|url=http://www.time.com/time/magazine/article/0,9171,862231,00.html|title=The Day of the Tiger|year=June 18 1956|publisher="" magazine]

His name was often paired with the name of another famous student leader as Ba Hein and Ba Swe, both "Thakins" or members of the nationalist "" (We Burmans Association) and were arrested by the British colonial government during the year of countrywide protests, demonstrations and strikes in 1938 known as the "1300 Revolution" ("Htaung thoun ya byei ayeidawbon" named after the Burmese calendar year). [cite web|url=http://www.burmalibrary.org/reg.burma/archives/199912/msg00642.html|title=The Statement on the Commemoration of Bo Aung Kyaw|month=December | year=1999|publisher=All Burma Students League|accessdate=2006-10-16]

In 1942 Ba Swe married Nu Nu Swe, daughter of U Hlaing Phyu, the owner of mining and lands in Township, Myeik District. They had nine children.

Ba Swe assumed the premiership in the aftermath of the parliamentary elections held in early 1956. Though the ruling (AFPFL - "hpa hsa pa la") was returned the leftist coalition of parties known as the National United Front (NUF - "pa ma nya ta") won 37% of the vote. The number of NUF seats in Parliament was increased. However on account of the 'first-past-the-post' electoral system, the NUF's representation in the Burmese Parliament was not reflected in the seats that it obtained. Still, the 1956 election results came as a shock to the AFPFL government. , the Prime Minister at the time, temporarily relinquished his office in order to devote full time to reorganizing and strengthening the AFPFL. Ba Swe, as a deputy of U Nu in the AFPFL and leader of the Party, took over the job from U Nu. After less than 9 months U Nu resumed office as Prime Minister on .

By mid-1958 Ba Swe had fallen out with his senior colleague U Nu. The AFPFL split into two factions, and Ba Swe together with his colleague Kyaw Nyein and thirteen other ministers resigned from the government on and tabled a against U Nu in Parliament. On the no-confidence motion was put to a vote in Parliament but the government of U Nu survived the motion by a mere 8 votes because the leftist NUF voted with the government.

Allegedly due to the instability arising from the split in the AFPFL and to the escalating insurgent problems U Nu on 'voluntarily' invited the Army Chief of Staff General to take over as Prime Minister in a 'caretaker' capacity for an initial period of six months. On the Burmese Parliament, with the support of members from both factions of the AFPFL but in the face of opposition from the NUF, voted to appoint General Ne Win as Prime Minister in a ''. (In his memoirs, entitled "Saturday's Son", translated by U Law Yone and first published in 1974, U Nu claimed that his handover of power was not 'voluntary' but that a group of Army Officers led by Brigadier Aung Gyi and Brigadier Maung Maung threatened him with a 'straight military coup' should he refuse to hand over power to Ne Win.)

Ba Swe was out of power and regarded as a 'dead tiger' politically at the time of General Ne Win's in March 1962. Hence he was not among those detained by Ne Win's Revolutionary Council. However at the time of the peace parley between the RC and various armed insurgent groups, Ba Swe, like many other Burmese politicians of the left and the right during that period, was detained.

Ba Swe and U Nu, his former senior colleague and later adversary, were released on . On the day of their release both Ba Swe and U Nu were driven to the office of the Revolutionary Council Chairman General Ne Win where Ne Win, among others suggested that both might wish to go abroad for a 'medical check-up'.(The news item concerning Ba Swe and U Nu's release from custody and their meeting with General Ne Win can be read in the issues of The "Guardian" and The "Working People's Daily").

Ba Swe, together with U Nu and Kyaw Nyein, was among the thirty three-men 'Internal Unity Advisory Board' that Ne Win's Revolutionary Council formed on . The Board was to report to the RC by on ways of promoting national unity.