image_caption = Bridge over the Apure River 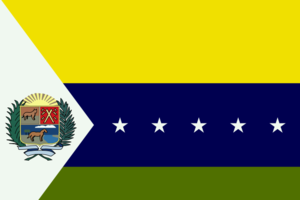 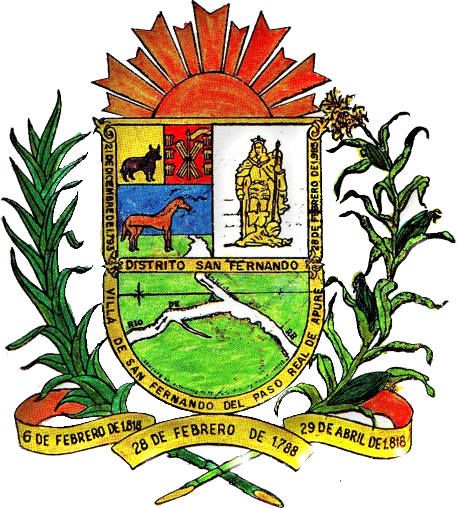 San Fernando de Apure is a in , . The population of the municipality area is 175.056 (est. 2001). The Eighteenth Century exports included heron feathers (for pens) and animal hides.

The bridge across the Rio Apure at San Fernando commenced construction in 1959 under the direction of President , and was opened February 1, 1961. It cost 8.5 million bolivars. Notable is the Casa de Bolivar, a National Historical Monument, at the intersection of Comercio St. and Independencia St. It is the 18th Century Armory, and was the dwelling of General . Now it contains a public library as well as the cultural offices of the municipality. It was restored in 1983.

It was founded February 28, 1788 on the banks of the Rio Apure, , by Don Fernando de Miyares González, the Governor and Capitán General of , New Granada, with the assistance of Don Juan Antonio Rodríguez and the Capuchine monk Fray Buenaventura de Benaocaz. On December 1, 1793 it was elevated to the status of a town (Villa).

In 1831 a private school for young men was opened by Juan Castellano; in 1844 classes for younger children were added; in 1875 the Federal High School (el Colegio Federal de Segunda Categoría) was opened; and at the end of the 19th century the Federal School Leon XIII was opened.

In 1912 the "Codazzi" Federal School is founded, in 1914 the "Cagigal" School, in 1931 is created the "Miranda" School, first institute of High school in the city, that later transformed into the Grammar school "Lazo Martí", then in 1953 was created the Sacred Family School, in 1964 the School of Plastic Arts "Juan Lovera".

The studies of Superior Education, begin in 1976 with the creation of the Apure Nucleus of the "Simón Rodriguez University", continuing with the beginning of workings of the "Experimental National University of the Western Plains", in 1977, and the Local Center of the "National Open University" in 1978. At the present time works, in addition to the mentioned, extensions of the "Libertador Pedagogical Experimental University", "University of Carabobo", "Bicentennial University of Aragua" and the "José María Vargas University".

Also the city, has been cultural center, of folkloric manifestations, being: , "Carmelo Aracas, Ramon García, Urbino Ruiz, Marcelino Castillo, Felix Marchena, Omar Moreno, Manuel Luna", , , "Francisco Montoya, Isabelita Aparicio, Pedro Gamarra" and , among others, representatives of the most important musical manifestation of the region and the country, the , along with the , the cuatro and s, is part of the history of San Fernando de Apure.

San Fernando de Apure has one municipality: "San Fernando Municipality", Venezuelan law specifies that municipal governments have four main functions: executive, legislative, comptroller, and planning. The executive function is managed by the , who is in charge of representing the municipality's administration. The legislative branch is represented by the Municipal Council, composed of seven , charged with the deliberation of new decrees and local laws. The comptroller tasks are managed by the municipal 's office, which oversees . Finally, planning is represented by the Local Public Planning Council, which manages development projects for the municipality.

San Fernando de Apure is recognized in , to be a very warm locality by its location in the center of the Venezuelan . The annual average is between 22 °C and 30 °C. Nevertheless it is easily bearable. The humidity can reach more to 79%, or due to its location next to the that in its closer point of the city covers up to 300 meters wide in its channel. The relief of San Fernando is totally a plain. Natural land elevations do not exist, and the visibility of the horizon can reach up to 10 km. Some high barriers can be artificially by engineer installations for the prevention of floods. The city is established on humid grounds, reason why civil constructions superior to 5 levels are not admitted. In this sense, San Fernando projects a flat skyline.

The municipality that conforms "San Fernando de Apure", limits to the east with the , and to the north with the , also there are other rivers that end in the Apure or the Orinoco, some of them are: Rivers: , , , Among others. Sewers: "Atamaiquita sewer", "Mangía sewer", Among others. Lakes: in the city there are few lakes, "Macanilla lake" is one of them, and simultaneously it is the greatest lake of the San Fernando municipality, is located to the south of the municipality, to the north of the population of "El Caimán".

The city is conformed by three urban nucleus: San Fernando de Apure, who covers all the metropolitan area in both shores of the , the satellite town of to the west, which conforms another political jurisdiction, and to the east "El Recreo" parish. In agreement with the 2001 n census, the urban area of San Fernando was conformed by 175.056 inhabitants, having Biruaca an intercensal rate of the 69,4% relative growth, and San Fernando the 36,1%. San Fernando lifestyle varies according the zone, wealth and age. Many young people of the metropolitan area characterize themselves to assume an urban style with fort influence of nonown cultures of the locality, reflecting in first term North America lifestyle, and soon expressions of the north region of Venezuela (mainly, lifestyle). The adult population of the city is charged of a mixed style, that goes from traditional customs, to the nonown. In certain groups of the greater adult population a traditional lifestyle is present, with typical characteristics of the region. Towards in the peripheral zones of the city, can be appreciated very rustic customs and traditions, with little impact of nonown cultures.

The city host the political and administrative seat of the Apure state. Being the government and the public administration its main economic activity, followed by the Education sector. The city is the main financial establishment of the state, whose first activity is the and , in this sense, mainly the bovine and pig cattle ranch, with production of meat, milk and cheese, in the Agriculture, the main products are , , , and . On the other hand, , is a traditional activity, but only reduced to the local market.

Is the popular folkloric dance of San Fernando de Apure, since 1997, each , great dolls (Calendas), dance by the streets in the day of its , , like a tribute to him and god. Calenda is synonymous of special celebrations or dates. It is a word coming from Latin kalendae, according to the , this word means "first day of the month", the same from where the word "Calendario" (English: ) comes.

Is a resembling the waltz, and an accompanying , having African and European influences, is played with the "" (harp), "", "cuatro", and "s", making use of patterns, especially of , and alternation of 3/4 and 6/8 s. It was originally played, most often also sung, by the "llaneros", and thus also called música llanera. The and the or bandola may perform the main while a cuatro performs the , adding its characteristic rhythmic, sharp percussive effect. The cuatro and the bandola are four-stringed instruments which are descendants of the Spanish . The only real percussion instruments used are the s. Besides the genre and dance, the name "joropo" also means the performance, the event or occasion of performance

Considered the most important and classical building of the city, it is located in front of the Plaza Camejo. It was constructed by Italian immigrants, as a residence and factory, at the beginning of the . It was an Export Center to and the , and was the scene of several robberies and murders due to the immense value of the merchandise held there. Today, the Barbarito Palace has been restored and houses a museum where original mosaics can be observed.

This Cathedral, was planned by the German architect "Robert Klein", and constructed by the engineer "Manuel Pérez Marcano", in a lapse of ten years. The works began in 1959, under the sponsorship of the Municipal Council of San Fernando and the Apure state government, Once concluded, it was consecrated on , , in the anniversary of the foundation of the city, by Monsignor "Felice Pirozzi".

*San Fernando, is the main educative center of , the city homes the majority of universities with seat in the state, some of them are:

("Universidad Simón Rodríguez") or USR, is a public institution with seat in , having since 1976 a nucleus in San Fernando. This university was born with the Nucleus of Caricuao, Caracas, on October, 1971, by a decreed of the president , for the creation of a new university in the Capital Region. The Organizing Commission constituted with seven members, all designated by the executive. On July, 1976, the institution adopt an administrative conformation, that implies hierarchies and a vertical organization, then the university expand to other regions.

("Universidad Nacional Experimental de los Llanos Occidentales Ezquiel Zamora") or UNELLEZ, is a public institution, with nucleus in San Fernando, since 1977. Has like mission, to look for, and apply the knowledge for the integral formation of the citizens, taking in consideration their personal interests, the interests of the local and regional community, and the interests of the nation, contributing with the development and transformation of .