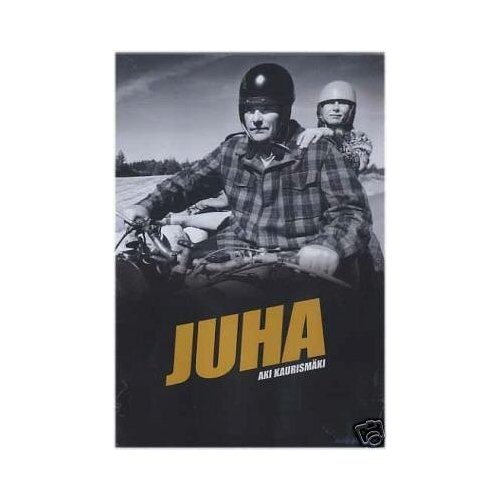 "Juha" is a 1999 Finnish film written and directed by . The film was based on a famous 1911 novel by the Finnish author marking this as the fourth time the novel was adapted for the screen. [Holden, Stephen. [http://movies.nytimes.com/movie/176591/Juha/overview Juha (1999)] , "". Accessed , .] The original story takes place in the 18th century but Kaurismäki’s remake is set in the 1970s. It tells the story of a love triangle where a simple peasant woman leaves her husband after falling in love with a modern . "Juha" is a shot in with the dialogue coming in the form of subtitles. [Kirkish, Joe. [http://www.keweenawnow.com/views/kirkish_club_finndigo_05_01/kirkish_club_finndigo_05_01.htm Club Finndigo to present Kaurismaki's Juha Jan. 21] , "Film.com", , . Accessed , .]

Marja () is a simple peasant woman married to her older husband Juha (). They lead a very simple country life, spending most of their days farming and tending to their livestock. Marja’s world is turned upside down when Shemeikka () comes to the happily married couple asking them for help with his broken down sports and a place to spend the night. As Juha works to repair the car, Shemeikka attempts to lure Marja to leave Juha and come to the city with him. A hesitant Marja does not want to leave her husband at first but ultimately gives in to temptation after dreaming of a wonderful new life in a big city. Shemeikka and Marja leave for the city but Marja’s dream quickly becomes a nightmare when Shemeikka enslaves her in a brothel.