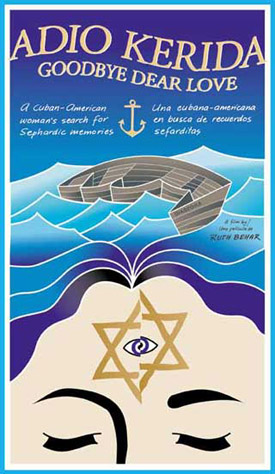 "Adio Kerida: Goodbye my Dear Love" is an award-winning by that follows her trip back to , the place of her childhood, as she searches for memories from her past and investigates the dwindling Jewish community that remains.

Ruth Behar was Born in Cuba before ’s but was too young to remember the that she and her family left behind upon immigrating to the The film follows as Behar leaves her home in to return to Havana, where her father and grandfather once worked as .

Behar presents Danayda Levy as an example of . Danayda’s mother is a Jehovah’s Witness, while her father, Jose, is president of the Sephardi Jewish center. She sits in her mother’s apartment, with her sister who practices , the Nigerian-cum-Afro-Cuban religion. While Santeria sings praise to , the “one who opens doors,” Danayda plays the drum and professes her commitment to . Danayda reads from the with her father's help.

Ruth Behar is half and half . Her father, a dark haired Turkish Jew, traces his history back to the expulsion of the Jews from Spain in 1492. “It is said that when our ancestors left Spain, they took the keys with them,” says Behar, “always believing in the possibility of return.” Fittingly then, she finds reminders of her family’s history everywhere: her parents’ former apartment in Havana is unaltered –- not a piece of furniture out of place; the Behar name is all over the gravestones in the Sephardic cemetery; and on the street named Inquisador, Behar visits the ruins of her father’s temple. She asks, “Who am I in Cuba? A returning , a reluctant , or a ?”

"Visual Anthropology Review":"Personal, poetic, and reflective...offers a glimpse into a relatively unknown realm of the Cuban reality. Recommended."

"Library Journal":"Offers an easy-to-view introduction to a fascinating culture. Libraries with strong Jewish studies collections should definitely have this one."