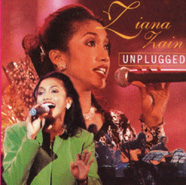 "Ziana Zain Unplugged" is 's first live album released in 1996. All the tracks were sang during live performance. The album went platinum, selling more than 80,000 copies in . .

"Ziana Zain Unplugged" includes one song which wasn't available from Ziana's previous albums: "Gerhana". Two versions of this album were produced which were live version and studio version. The song "Gerhana" was included in both versions of the album.