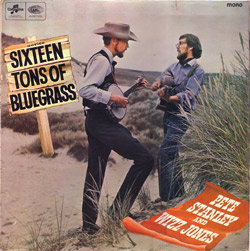 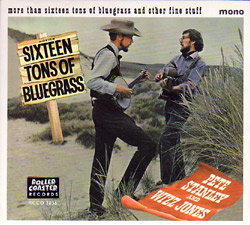 Sixteen Tons of Bluegrass is an album by and produced by , and originally released in the UK1966 on . Wizz & Pete were probably the first British musicians to successfully interpret America's favourite traditional music for UK audiences [ [http://time-has-told-me.blogspot.com/2007/06/pete-stanley-wizz-jones.html Time Has Told Me: Pete Stanley / Wizz Jones ] ] . The album was also released on the Joker label in as Way Out West, with a different cover design. Wizz Jones is quoted, [ [http://www.wizzjones.com/disc_wayout.html WizzJones.com - Discography - Way Out West ] ] describing the cover, "I've only seen this once, as I recall the alternative sleeve design is hilarious. A mini-skirted girl is perched on a gate being serenaded by a smart young man in blue jeans!"

In 2000 it was released on CD by as More Than Sixteen Tons of Bluegrass and Other Fine Stuff, with the addition of a number of bonus tracks. The bonus tracks comprised the 2 tracks from the duo's 1965 single (Ballad of Hollis Brown, Columbia DB7776) and six previously unreleased tracks from the "Sixteen Tons" recording sessions. The masters of some of the original tracks had been lost by this time, but those tracks were reinstated by dubbing from commercial copies or from acetates, without appreciable deterioration of quality. The CD reissue therefore comprises the entire output of the duo, and includes a presentation pack with a booklet of detailed notes and archive photographs.

After this album, Stanley continued to play bluegrass with , and Jones went on to have a mainly solo career, playing blues and contemporary folk songs written by himself and others.

All tracks are credited as "traditional, arranged by Pete Stanley & Wizz Jones", except where stated otherwise.

* = Denotes a song that was previously unreleased