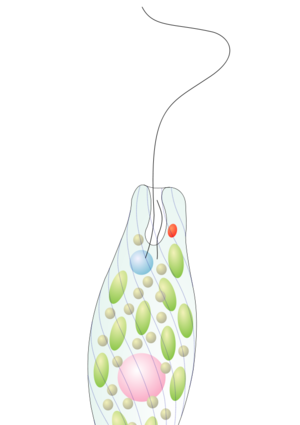 Phagotrophs
?
?The euglenids (or euglenoids) are one of the best-known groups of s, commonly found in freshwater especially when it is rich in organic materials, with a few marine and endosymbiotic members. Many euglenids have s and produce energy through , but others feed by or strictly by diffusion. They belong to the phylum , and their cell structure is typical of that group.

Euglenids are distinguished mainly by the presence of a pellicle, which is composed of proteinaceous strips underneath the cell membrane, supported by dorsal and ventral s. This varies from rigid to flexible, and gives the cell its shape, often giving it distinctive striations. In many euglenids the strips can slide past one another, causing an inching motion called metaboly. Otherwise they move using the flagella.

The euglenids were first defined by in 1884 as the flagellate order Euglenida. Botanists subsequently treated the algal division Euglenophyta; thus they were classified as both animals and plants, as they share characteristics with both. This conflict is an example of why the kingdom a was adopted. However, they retained their double-placement until the flagellates were split up, and both names are still used to refer to the group.

The classification of euglenids is still variable, as groups are being revised to conform with their molecular . To some extent, however, the results support the traditional groups based on differences in nutrition and number of flagella; at any rate these provide a starting point for considering euglenid diversity.

As with other Euglenozoa, the primitive mode of nutrition is . Prey such as bacteria and smaller flagellates are ingested through a , supported by microtubules. These are often packed together to form two or more rods, which function in ingestion, and in "Entosiphon" form an extendable siphon. Most phagotrophic euglenids have two flagella, one leading and one trailing. The latter is used for gliding along the substrate. In some, such as "Peranema", the leading flagellum is rigid and beats only at its tip.

In many cases exposure to certain chemicals or prolonged absence of light may kill off the chloroplasts without otherwise harming the organism. There are a number of species where chloroplasts are absent, formerly treated in separate genera such as "Astasia" (colourless "Euglena") and "Hyalophacus" (colourless "Phacus"). Since they lack a developed cytostome, these forms feed exclusively by absorption.